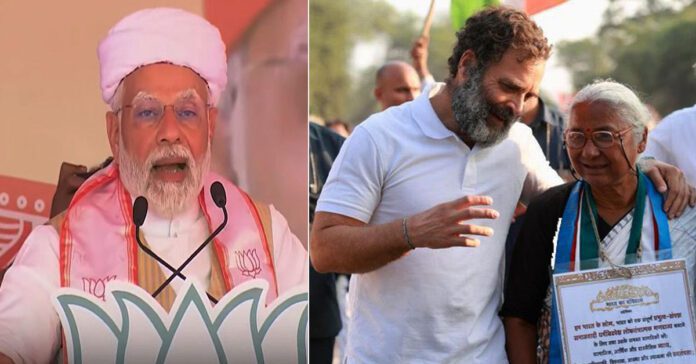 Gujarat chief minister Bhupendra Patel questioned Medha Patkar’s presence at the yatra and said Congress and Rahul Gandhi have time and again shown their animosity towards Gujarat and Gujaratis.

By giving Medha Patkar a central place in his yatra, Rahul Gandhi shows that he stands with those elements who denied water to Guajarati’s for decades. Gujarat will not tolerate this, said Gujarat Chief Minister said.

Who is Medha Patkar?

Medha Patkar is a social activist and former politician. Medha works on various crucial political and economic issues raised by tribal, Dalits, farmers, laborer’s and women facing injustice in India. She is an alumnus of TISS, a premier institute of social science research in India.

Medha Patkar was born as Medha Khanolkar on 1st December 1954 in Mumbai, Maharashtra. Medha is the daughter of Vasant Khanolker, a freedom fighter and labor union leader and her mother Indumati Khanolkar, a gazette officer in the Post and Telegraphs Department. She has one brother, Mahesh Khanolkar, an architect.

Medha Khanolkar earned an MA in Social work from Tata Institute of Social Sciences. She was married for seven years (hence her surname Patkar) but the marriage ended in divorce.

Medha Patkar worked with voluntary organizations in Mumbai’s slums for 5 years and tribal districts of North-East districts of Gujarat for three years. She worked as a member of the faculty at Tata Institute of Social Sciences but left her position to take up the fieldwork.

She was a PH.D. scholar at TISS, studying Economic development and its impact on traditional societies. After working up to M.Phil. level she left her unfinished Ph.D. when she became immersed in her work with the tribal and peasant communities in the Narmada valley spread over three states.

She and her organization, the National People’s Movement Alliance supported the Aam Admi Party during Lok Sabha’s campaign.

She received many awards and honors in between 1991-2014 of which few are “Person of the year BBC”. Mother Teresa Award for Social Justice and Basavashree Award.

ALSO READ: Remembering Nehru on his birthday amidst blame game by BJP

Congress MP Rahul Gandhi resumed the Bharat Jodo Yatra from Kamareddy on Monday. According to the Congress,...
News