What Arnab does is not Journalism; it is Licking -ism 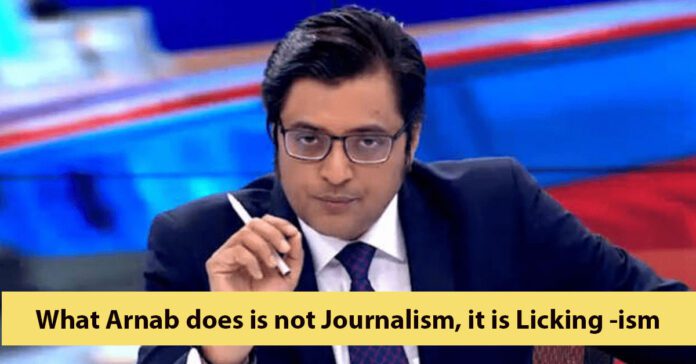 Arnab Goswami’s known for his loud, unruly anchoring and disgustful mannerisms like a joker is suddenly silenced by the surprising arrest made by the Mumbai Police.

The Editor in Chief of a popular TV presentation uses shameful language. Arnab has acclaimed fame internationally for the wrong reasons like loud reporting and biased views. What Arnab is doing is definitely not journalism.

The language he uses reflects his real interests and hidden agenda. The way he targets people and disrespects everyone should not be allowed on air. These are few comments people send regarding Arnab Goswami.

He is the most biased, hypocrite, boastful and arrogant so-called journalist who thinks he is both a detective or a judge running media trials engaged in defaming and humiliating everyone including the debate panellists who do not support his self-fabricated narratives.

He makes lots of noise by shouting and sensationali sing by using his favorite phrase “the nation wants to know” but turns a blind eye when he has to focus on real-life issues faced by the citizens of the country.

For all those who do not know, Goswami had started his career as a journalist with The Telegraph in Kolkata. He later moved to Delhi and joined NDTV. He was a part of NDTV from 1996 to 2006. He anchored daily newscasts and hosted many other programmes.

Goswami, won an award as the Best News Anchor of Asia in 2004 in the Asian Television Awards. He later joined Times Now and then shifted to Republic TV. This Channel is owned and funded by Mr.Rajeev Chandrashekar.

Arnab is noted for his opinionated reporting in support of Bharatiya Janata Party and Hindutva, whom he is loyal to. He speaks on a wide spectrum of issues supporting, in fact liscking the boots of his masters and tries to present the opposition in a negative role.

He is so loyal to his masters that they conduct press conferences and debates in his favour. Truly, they wouldn’t find a more loyal dog than him. Even the Union Minister comments that condemns the arrest of Arnab Goswami.

Unfortunately, the Union Minister, Prakash Javadekar spoke as if Arnab Goswami is above the law and as if Bjp has attacked journalism at all. Just because he is Pro-BJP.

Surprisingly, even the Home Minister seees this as a National issue, inspite of knowing that Arnab Goswami is accused of many crimes and corruption. This shows how useless, pathetic and spineless the ruling party. They do not even know the difference between personal issue and National issue, when it comes to the licking-ism of their party.

By the way Arnab was arrested by police from his residence on Wednesday for allegedly abetting suicide of a 53-year-old interior designer.

“We are happy with Arnab Goswami’s arrest. There was a lot of pressure on us to close the case from the police earlier. Husband e-mailed Arnab asking to return money and that it was matter of life and death for him. He didn’t meet our father,” Naik’s daughter said.

Naik’s daughter Adnya claimed that the non-payment of dues by Republic TV had driven her father and grandmother to suicide.. naik’s daughter said that she didn’t want to make the issue political. She said that they have lost two family members due to this issue. She just wants to make people understand how powerful people like Arnab Goswami get away with such things.

ALSO READ: Newsroom or Courtroom: Employee criticism and resignations on Republic‌ TV after the Rhea issue