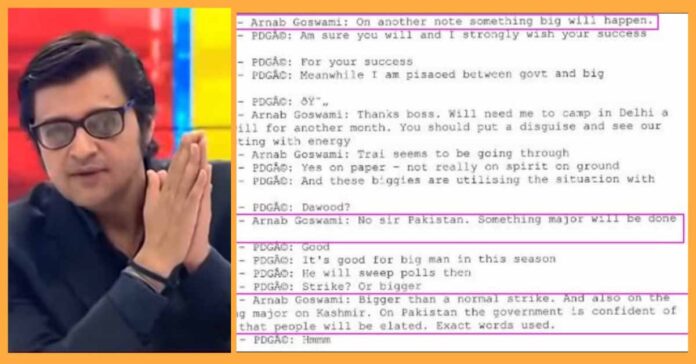 After the alleged chats between Goswami and Then BARC CEO were leaked, unbelievable loopholes in the government are obvious to everyone. Some sensational information has also come to light.

The leaked chats gives us the clarity about how prior information on some sensitive events and details of confidential matters are shared to few civilians and journalists even before it happens.

In an unanticipated twist in the TRP Scam, a 500-page document of alleged chats of Republic TV’s Arnab Goswami was allegedly leaked on social media. These chats revealed damning information.

The chats allegedly show connections of Arnab Goswami with the Prime Minister’s office and members of the ruling government. Due to these connections, Arnab made efforts to manipulate TRPs in his favor. He was helped by the BJP government and much more was done to bring acclaim to his channel.

Arnab Goswami, in one of the alleged chats of February 14, 2019, was very insensitive towards the tragedy that struck the 40 CRPF personnel but was very happy about the high ratings his channel received in the aftermath of an attack.

40 CRPF personnel had lost their lives after a convoy of vehicles carrying security personnel on the Jammu Srinagar National Highway was attacked by a vehicle-borne suicide bomber at Lethpora in the Pulwama district, Jammu and Kashmir. It is alleged that Arnab Goswami told Partho Dasgupta in his chats.

It is evident in that chat “Bigger than a normal strike,” Goswami had told Dasgupta about what may transpire in retaliation of the attack. In one of the chats, on February 23, 2019, Goswami texted Dasgupta saying : “On another note something big will happen”.

Dasgupta expected it to be something about Dawood but through his chats we understand that it was about the Pulwama attack. It is also clear that they were ready with big plans because they wanted to win in the elections.

Partho Dasgupta: “It’s good for big man in this season.”

Partho Dasgupta: “He will sweep polls then.”

Arnab Goswami: “Bigger than a normal strike. And also on the same time something major on Kashmir. On Pakistan the government is confident of striking in a way that people will be elated. Exact words used.”

It is also noted that he had prior information about the article 370 three before. He had sent his team even before article 370 was announced. There are many more revelations about how a journalist is aware of national secrets.

Do you think it is a matter of great concern?

Why this bias? Is the Supreme Court selective towards few individuals? How is he able to get...
Columns

Why does Arnab’s arrest have selective outrage by BJP?

Intellectuals are shocked with selective outrage by the government and BJP and it is unwarranted. BJP has...
Load more