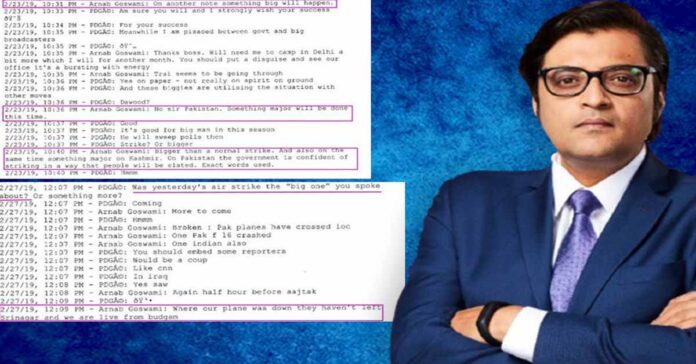 The whatsapp chats leak of Arnab Goswami and the BARC CEO reveals so much about the sad state of affairs in our country.

‘This attack we have won like crazy’ these lines are found in watsapp chats of Arnab, where we understand that he is happy to see his TRP rating high rather than feel sorry about 40 soldiers martyred.

It is such an irony that the government in our country gets offended by comedians for satire but not by the media who knew about the big terror attack like Pulwama well in advance which is exposed badly by whatsapp chats.

Arnab Goswami reached high TRP’s by exploiting Sushant Singh Rajput’s death to the fullest, which implies that Arnab Goswami is a sadist who enjoys death. It also conveys that Arnab Goswami is just a minion working under his political bosses. He has no emotions or feelings. That’s why he finds it to be a cause of celebration that 40 Indian soldiers were killed by one terrorist. Because it will increase his channel’s TRP.

The fourth pillar of democracy is the media. The media is supposed to question the government if any security lapses occur. Instead, Arnab and the Republic TV media celebrates terror attacks that causes massacre. Because this increases TRP for traitors like Arnab.

When the whole nation was mourning the Martyrdom of 40 brave hearts, Arnab Goswami was enjoying the TRP and BJP-RSS were gearing up to get political mileage.

If karma plays its role then maybe he has to pay for those sad widows and the orphaned kids of our soldiers. Lives lost on orchestrated attacks, for political gains. These guys have blood on their hands.

I overheard one of the senior citizen saying ‘So much greed, so many lies, so much corruption all for what? Don’t they realise that one day we are all going to die and will have to answer for our actions. Where do they think they will go with all this power and money?

Another thing the nation wants to know, ‘How did a tv journalist know about the military secret movement.’

A direct linkage between Pulwama, Balakot air strikes and 2019 General elections shows how the PMO and their own Media compromised National Security. Was National Security milked for electoral purposes ?

The government has killed its own soldiers and staged pulwama attack, just to secure election victory. Such tactics reflect the ill mentality of Indian political elite and radicalisation of Hindu society. It’s quite possible that terrorists were shifted from Balakot well in advance as Arnab may have revealed the secrets.

Surprisingly, the citizens are blind today they won’t see that anti national Arnab celebrated death of our army brothers

With all these developments taken into consideration, Arnab will be screwed and will be bumped off, by his political masters very soon. We just have to wait and watch.

ALSO READ: Arnab Goswami – A traitor in the mask of nationalism

A special court in Bangalore has sentenced a 22 years old engineering student for five years, for...
News