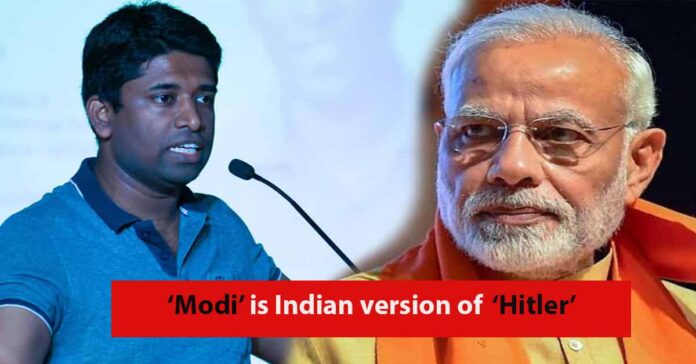 In a tweet on Wednesday, Gopinathan said the ‘difference between a Hitler and Modi’ is one is “Facist,” while the other “fool.”

He sarcastically pointed out that when Hitler would receive a propaganda leaflet from Paul Joseph Goebbels, the Reich minister of propaganda of Nazi Germany, he would say “Good one. Well done,” then Gopinathan compared the same situation to Modi . He said that If PM Modi receives a fake forward from the BJP’s IT cell, he would say, “Really? Man, I had no idea! Thank you for sharing.”

Saamana, a daily newpaper attacked the ruling BJP’s IT cell by referring it as ‘Joseph Goebbels’ father’, who was the Minister of Propaganda in Nazi Germany.

On Wednesday, Shiv Sena spokesperson attacked the ruling BJP’s IT cell by referring it as ‘Joseph Goebbels’ father’, the Minister of Propaganda in Nazi Germany.

When we see the present situation of the central authorities over the farmers’ protest, we can see how BJP is trying to push the country towards lawlessness. Farmers are being accused of bringing Khalistan and trying to divide the country again.

This issue of Khalistan is over long back, but BJP is trying to spread lawlesness by its conspiracy theories by linking the nabbed terrorists to Khalistan. It is trying to prove that Khalistanis are a part of farmers’ protest. Even Goebbel must be surprised by the commanders of BJP IT cell.

Nazi propaganda tried to create an environment of fear and terror in their country, just to gain political benefits. It pretended and showed off that they were the only protectors. The same strategy is being used by the BJP IT cell here. Instead of pacifying the farmers, the Modi led government is interested in letting the unrest seethe.

Though the BJP Government controls the media, befriends the Supreme Court and shows its dominance over the CBI,NIA etc it could not stop the farmers’ protest and the Bharat bandh.

Most of the time, BJP IT cell compares today’s government with the Congress government, let us be very clear that the Emergency imposed by Indira Gandhi in 1975, was done when there was a risk to Indira Gandhi. The Union ministers were murdered, train services were stopped, then. Hence, Indira Gandhi had accused the opposition of bringing in anarchy, because they had instigated the people to encourage lawlessness.

When we compare that day and this day we see that nothing of the sort is happening now. The opposition is not instigating the farmers but only wants the government to listen to the farmers’ version too.

Congress Leader Rahul Gandhi posted an Instagram reel on the occasion of Friendship day. He took a...
Load more