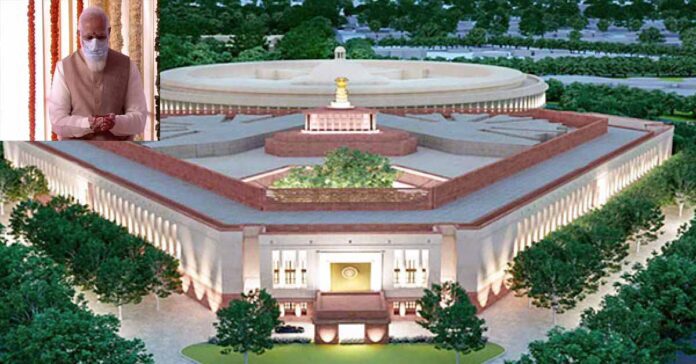 The new parliament building is proposed to be constructed in an area of 64500 square meters at an estimated cost of Rs 971 crore. It is to be completed by 2022.

Prime Minister Narendra Modi will lay the foundation stone of the new Parliament House, on Thursday. Leaders of various political parties, Union ministers and ambassadors of several countries, will attend the ceremony.

PM Modi will lay the foundation stone of the new Parliament House in Delhi at 12.55 pm. Bhoomi puja ceremony will take place at 1 PM, followed by Sarvadharma prayer at 1:30 pm. Later, the Prime Minister will address the people at At 2:15 PM.

The new parliament building is proposed to be constructed in an area of 64500 square meters at an estimated cost of Rs 971 crore.It is planned to be a four-storey building. It’s construction is expected to be completed by the 75th anniversary of India’s independence. Each Member of Parliament will be provided 40 square meters of space for office in the reconstructed Shram Shakti Bhawan, expected to be completed by 2024.

The Vice President and Rajya Sabha Chairman M Venkaiah Naidu and Lok Sabha Speaker Om Birla, proposed the construction of the new Parliament House,on 5 August 2019 in the Rajya Sabha and Lok Sabha respectively. The design of the new Parliament House has been designed by M/S HCP Design and Management Pvt Ltd of Ahmedabad and will be constructed by Tata Projects Limited. This was issued by the Lok Sabha Secretariat.

The new building will be furnished with all modern audio-visual communication facilities and data network systems. Special attention is being paid to ensure that there is minimal disruption in the holding of Parliament sessions during the construction work and all environmental safeguards are followed.

The new Parliament House will also showcase India’s glorious heritage. Artisans and craftsmen from every nook and corner of the country will integrate and contribute cultural diversity in this building with their art. The new parliament building will be energy efficient and well equipped with the technical facilities.

The new Parliament building will be triangular shaped building. It is being built adjacent to the existing Parliament House will be equipped with security facilities. The new Lok Sabha and Rajya Sabha building has been increased by three times larger, than the existing size.

The design of the new building will be an amalgamation of the rich Indian culture, regional art, craftsmanship and diversity of architecture. The Central Constitutional Gallery has been well planned. Provisions are also given for the common people to see it.