Kerala Nuns attacked in UP by Bajrang Dal Members

The nuns were also forced to de-board the train in the night mercilessly, just because of a suspicion over conversions. 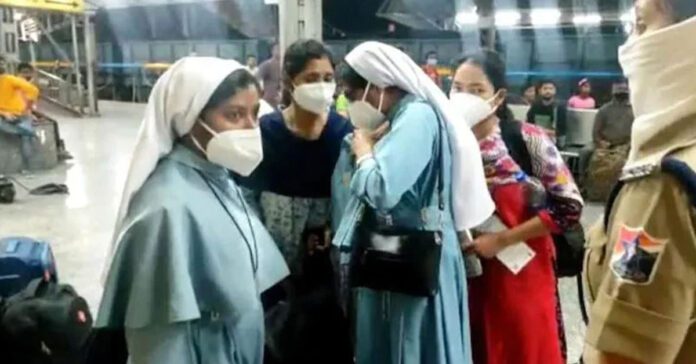 Two Nuns were attacked and accused of religious conversions. The nuns were also forced to de-board the train in the night mercilessly, just because of a suspicion over conversions.

As far as the country is concerned, it is moving towards an uncertain future. It looks as if ‘No one can save our country in the near future too’. This is what seems to be the situation in India now. No action was taken on the above incident even though an official letter was written to the Home Minister.

These Bajrang Dal members were returning from a training session. They had a suspicion that the nuns were converting the two assistants into Christianity. Immediately, they were asked to show their Aadhar cards and spoke rudely.

Furthermore, the nuns had to get off the train and then an inquiry was made.  They inquired them regarding their religion caste and creed. Only when they felt assured that there was no conversion going on, they allowed them to proceed in their journey.

The nuns traveling on the Haridwar-Puri Utkal Express on March 19, were forced to get off the train at Jhansi. A 25 seconds video which went viral shows the nuns and their assistants surrounded by some men, some of whom appear to be policemen.

On the other hand, Bajrang Dal members were very rude with the women… “Go get your luggage. You will be sent home if what you are saying is correct” a man is heard saying.

“Why are you indulging in netagiri,” another said.

It is said that Jhansi Railway Police station personnel and the Bajrang Dal members together interrogated them. Subsequently, many other videos and photographs from the Jhansi railway station have become viral now.

The videos show us the real trauma and how the nuns were harassed to get off the train. Besides, they were also abused and forced to move to the Jhansi Railway Police Station.

Finally, after the interrogation, they were allowed to proceed in their journey.

There is a political uproar after more than 10,000 people converted into Buddhism in the national capital...
Activism

Controversial Ads in India: Many companies with popular brands look forward for Diwali festival to start their...
News

Members of Bajrang Dal, a right wing organization, entered a shop in Ahmedabad and burn a copy...
News

A 45-year old Muslim man was paraded through a street after assaulted by a mob accusing him...
News

Hindutva is a new word which of late became famous after 2013. All the activities which were...
News

In 1999, Graham Staines’,  the gruesome murder shook the entire country and the then Prime Minister Shri...