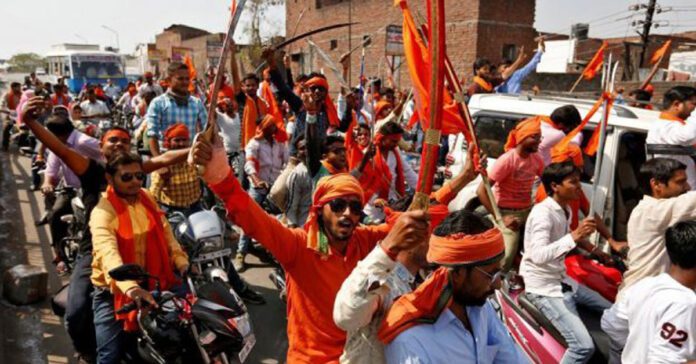 Hindutva is a new word which of late became famous after 2013. All the activities which were not according to the constitution were projected to be as right. These new developments came up when the BJP party tried every damn way to come into power.

The young or the first time voters were brain washed with fake stories and wrong ideologies. They aroused the feelings of the youth with hate speeches towards other religions.

Every strategy was used for their comeback to power. However, the youth are always kept in the dark regarding their tactics.

BJP, RSS and Bajrang Dal played vital roles to bring in hatred and communalism in India. Never before people were arrogant nor did they speak ill about religions.

As the old proverb goes, Stuck between the ‘Devil and the Deep blue sea’, now the situation of the BJP led government turned out to be.

As soon as BJP came to power, they showed RSS and the Bajrang Dal their places. They ignored to the core.

Eventually, the two organizations could not utter anything against BJP because they are a part of the crime they committed. The crime of bringing differences in our country.

“We all are one so there is no need to fight. The DNA of all Indian is the same for the last 40,000 years. We all come from the same ancestors and it is scientifically proven and that it what unites us and not politics.

Some intellectuals from minority are under fear that Hindus will overpower them. Those who have come here have survived this is a proven fact”, said Bhagwat.

Furthermore, he said, “I can be popular among Hindus bit cannot get support from Hindus. If Hindus say that Muslims should be wiped off, then they are not Hindus at all. That is the hierarchical ideology of the Sangh.

We may have different interests but society is the same. You can have differences over opinion. Islam came to India by attackers and since then attempts have been made to unite Hindus and Muslims”

There are speculations among the intellectuals that this version of ‘unity’ spoken by RSS chief, Mohan Bhagwat is to woo the voters in the upcoming Uttar Pradesh Elections.

It is a strategy to receive votes from all the communities. New theory of Hindu-Muslim unity is for elections only.

Politicians are such turncoats that they use religion, caste, creed and communities for their own gains. Hindutva concept bore no value until the people who wanted to come to power spread it to bring in hatred. Thus gaining power.

Consequently, they will change and then talk about Hindutva being synonymous to Anti- Nationalism. People are made fools and scapegoats for their benefits.

ALSO READ: RSS chief Mohan Bhagwat- Only a Hindu, can be a patriot