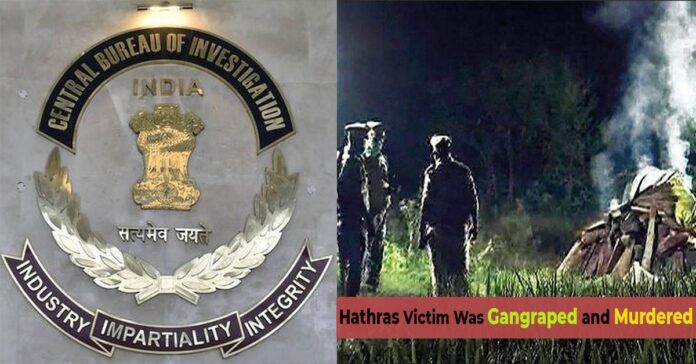 Hatras Case: The Uttar Pradesh Police had claimed that the 19-year-old Dalit woman killed in Hathras allegedly by upper caste men had not been raped, whereas the CBI contradicted to that and filed a chargesheet against the four on charges of gangrape and murder on Friday.

The CBI has named all the four suspect as accused of rape and murder. The four suspect Sandeep, Lavkush, Ravi and Ramu are accused of brutally raping and murdering a Dalit girl in the village. The charge sheet was filed against Sandeep (20), his uncle Ravi (35) and their friends Ramu (26) and Luv Kush (23).

The chargesheet was filed in a court in Hathras under IPC Sections 376 (rape), 376 (D) (gangrape), 302 (murder) and relevant Sections of the SC/ST Act, for assaulting a teenager by the four men on September 14. This teenager died a fortnight later at Safdarjung Hospital in Delhi. A post-mortem report attributed her death to cervical spine injury, caused by indirect blunt trauma.

The CBI will take the Hathras victim’s brother to Gujarat for a forensic psychological test and his psychological assessment will be done.

The Lucknow Bench of Allahabad High Court had expressed concern regarding the Hathras case that the government did not take any action against Hathras District Magistrate (DM) Praveen Kumar Laxkar. He had tried to liquidate the case. He did not maintain the impartiality of the investigation while securing his order in the Hathras case.

BJP's Pragya Singh Thakur, the main accused in the 2008 Malegaon blasts appears in the NIA court. She...
Columns

Modi doesn’t know the SC rule in appointing CBI Chief, or is it a drama?

Central Bureau of Investigation gets a new director. The new director of CBI is IPS officer Subodh...
News

Hathras case: A.P.Singh, the lawyer of the accused reveals the victim’s name in live show

Lawyer AP Singh is fighting a case on behalf of the accused of the Hathras case. He...
Crime

Hathras gangrape: BJP sinks to new low-This incident has proved again for how brutal India is when...
Crime

Yes Bank founder Rana Kapoor's wife and three daughters have been booked by the CBI over allegations...