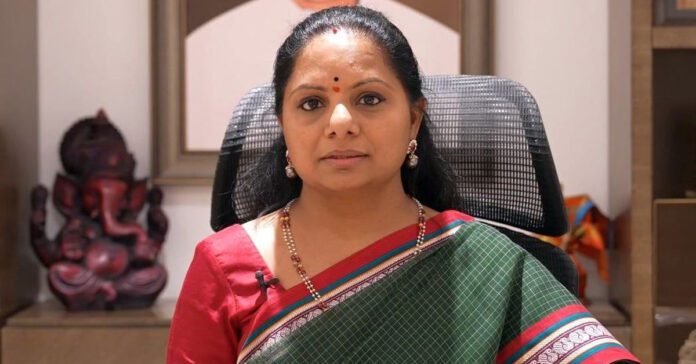 The Central Bureau of Investigation(CBI)  has sent a notice to TRS MLC Kalvakuntla Kavitha. A notice under Section 160 of the Code of Criminal Procedure was issued to the Chief Minister’s daughter. In connection with the allegations regarding the GNCT of Delhi’s excise policy for the fiscal year 2021-22.

As per the notice, “During the course of investigation of the subject cited case, certain facts have emerged, with which you may be acquainted with, hence your examination on such facts is required in the interest of investigation.

The CBI asked Kavitha to intimate the place of residence (Hyderabad or preferably Delhi) as per her convenience for examination at 11:00 hrs on 6.12.2022 in connection with  liquor scam.

In reply, Kavitha, in a post on Twitter, asked CBI officials to question her at her residence in Hyderabad.

What happens next remains to be seen, as the CBI cannot operate in Telangana without the state government’s permission. According to some legal experts, the use of Section 160 in this case was illegal.

Kavitha later issued a note stating: “I’ve been issued a CBI notice under Section 160 of Cr.P.C, seeking my clarification. I have informed the authorities that I can meet them at my residence in Hyderabad on Dec 6th as per their request”.

The CBI notice comes two days after the Enforcement Directorate (ED) named Kavitha and others in a remand report. Stating some Hyderabad-based businessmen & political leaders had formed a ‘South Group’ in influencing the government in Delhi to allocate liquor shops.

In the notice, the CBI mentioned Kavitha’s residential address in Road No 12, Banjara Hills. It said that during the course of investigation in the Delhi liquor scam, certain facts had emerged with which Kavitha may be acquainted with. Hence her examination on such facts was required in the interest of investigation.

Asked about the notice, TS High Court senior advocate Pattabhi Vemulapati said that serving notice to a resident of Hyderabad under Section 160 of the CrPC was illegal as the case was registered in Delhi.

An agency can serve notice under Section 160 only to anyone who stays in the jurisdiction, or stays in adjoining police limits, he said. Vulapati said that the courts had given judgment earlier in similar issues over the matter of serving Section 160 notices.

TRS MLC Kavitha Kalvakuntla: I’ve been issued a CBI Notice under Section 160 of Cr.P.C, seeking my clarification. I have informed the authorities, that I can meet them at my residence in Hyderabad on Dec 6th as per their request. pic.twitter.com/lEiJ9Yntdh

Contract employees of the Hyderabad Metro rail reportedly called for a protest in order to demand a...
News

The 82nd All-India Industrial Exhibition, known as Numaish, is back with flawless arrangements in Hyderabad from Jan...
News

Road accidents in the tri-commissionerates of Hyderabad, Rachakonda, and Cyberabad fell by 4% in 2022. The traffic...
International

Hyderabad: Rajiv Gandhi International Airport (RGIA) has been named one of the most punctual airports in the...
News

In Hyderabad, a road suddenly collapse in the middle of a market in Hyderabad's Goshamahal market area....
News

Telangana: In a tragic incident, a massive fire broke out in the house where 6 people, including...
News

Hyderabad: A ten-year-old girl who went missing from her school on Thursday in Dammaiguda, Jawaharnagar was found...
Load more