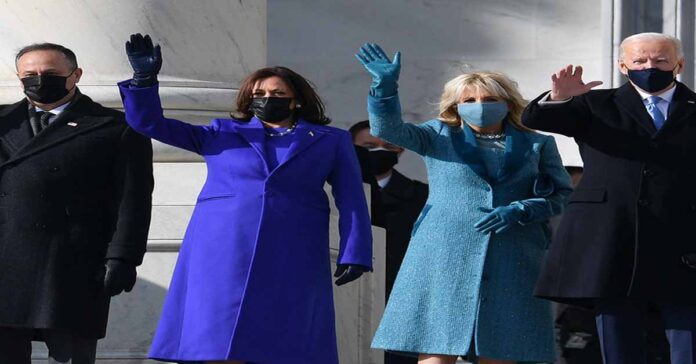 Joe Biden or Kamal Harris might not have given importance to clothing before but the attire of Joe Biden and Kamala Harris and their families sent a sense of symbolism and significant message to the people of America.

President Joe Biden, his wife, Jill Biden, Vice President Kamala Harris and her husband, Doug Emhoff, all of them chose American fashion designers for their attire for the Inauguration Day.

Their choice of their attire was mostly according to the preferences as the first family prefers to be dressed. It is observed that they had the choice of clothing to be symbolic and as per the tradition of the first family. Their attires were prepared by US designers, especially young and less well-known designers.

Kamala Harris was sworn in as Vice President, making history as the first Black, South Asian, and female person to hold the role. Kamala Harris wore a purple dress and coat designed by Black fashion designers Christopher John Rogers and Sergio Hudson, the two favorite designers of former first lady Michelle Obama. She paired her dress with a black mask and shoes.

Al-Qaeda leader Ayman al-Zawahiri was killed in a CIA drone strike in Afghanistan over the weekend. It...
News

After Taliban took over Kabul, Afghan Americans in the US protest against Joe Biden outside white house....
International

Joe Biden took the oath of office on a massive book on Wednesday. All the people watching...
International

US violence: When the lawmakers met inside to formally certify Biden's victory over Trump in the November...
International

Putin says he will congratulate Biden when the ‘legal processes’ are completed. Russian President Vladimir Putin has refused...
International