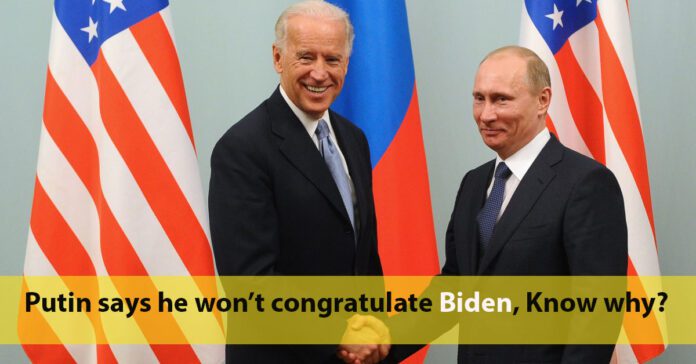 Putin says he will congratulate Biden when the ‘legal processes’ are completed.

Russian President Vladimir Putin has refused to congratulate Joe Biden upon his election to president-elect on Saturday, because there are still “legal processes” to go through.

The spokesperson of Russia, Dmitry Peskov, said that the country would only recognise a new president on confirmation of “official results,” on Monday. He did not give any elaboration on what exactly Russia meant by that.

While speaking to journalists he said that they believe the correct thing to do is wait. He added that President Putin has on many occasions said he would respect any choice the American nation makes.

Former vice-president Biden won over his incumbent Donald Trump in the race to the White House on Saturday. This was confirmed after securing Pennsylvania’s crucial 20 electoral college votes.

The relations between US and Russia are already at their worst since the Cold War. They also feel that things are unlikely to get better with a known adversary at the helm.

Vladimir Putin and Joe Biden have a problematic personal realtion. Joe Biden, as the vice President in 2014 claimed he had told Putin he had “no soul.”

In the absence of an official response over the weekend, it was left to the Sunday propaganda news shows to outline the likely position. In what appeared to be a deliberate snub, the flagship Vesti Nedeli led with Friday’s news of the death of a famous Soviet comic.

When it did get round to reporting on the US election, it depicted both Mr Biden and Mr Trump as quarrelling candidates accusing each other of fraud.

Al-Qaeda leader Ayman al-Zawahiri was killed in a CIA drone strike in Afghanistan over the weekend. It...
Foreign Affairs

President Vladimir Putin vowed “victory will be ours as in 1945” regarding their war with Ukraine. On...
International

No one knows much about Putin's private life and his daughters The world does not know much about...
International

Ukraine President shares his Location, says ‘Not Hiding, Not Afraid’

Ukraine President Zelensky shared his location in a new Instagram video. In the video, he said that...
News

After Taliban took over Kabul, Afghan Americans in the US protest against Joe Biden outside white house....
News

Journalism and Journalists in India is the most risky job. Above all, their life become harder if...
International

Joe Biden took the oath of office on a massive book on Wednesday. All the people watching...
International

US violence: When the lawmakers met inside to formally certify Biden's victory over Trump in the November...
Load more