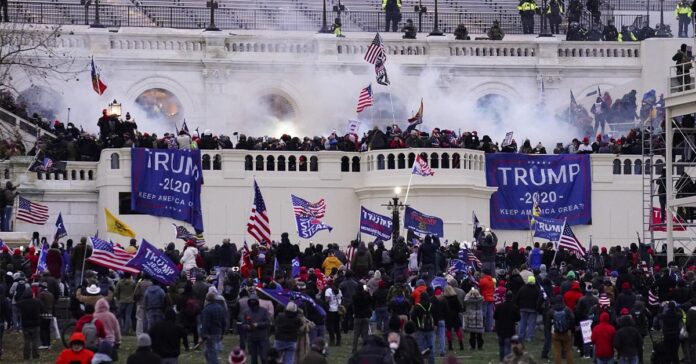 US violence: When the lawmakers met inside to formally certify Biden’s victory over Trump in the November 3 election, demonstrations flared as in US Capitol. The authorities of Law enforcement struggled to maintain order.

The Police opened fire in which four people died, including one woman who was shot by a police officer. In attempt to stop the demonstration, the police were forced to open fire, amid protests and rioting on Capitol Hill by supporters of outgoing President.

According to the Washington Post, instructions were given to Lawmakers to grab gas masks as police deployed tear gas inside the Rotunda, the ornate area under the dome that connects the House and the Senate.

Vice President Mike Pence and lawmakers were evacuated to safe locations, as lock down was placed in the House and Senate and the entire Capitol.

The Senate, which had objections to Biden’s victory brought by a band of pro-Trump Republican lawmakers, has voted 93 to 6 against the effort to reject Arizona’s electoral count, overcoming the first of what may be multiple hurdles to the November presidential election’s certification.

The House of Representatives are yet to vote on Arizona. It is expected to fail in the House of representatives too. Congress would continue its process to certify the electoral votes of all 50 states.

Though Biden won the election by 306-232 in the state-by-state Electoral College and by more than 7 million ballots in the national popular vote, Trump continues to falsely claim there was widespread rigging and fraud and that’s why he was defeated.

” McConnell said on the Senate floor, ‘The voters, courts and states “have all spoken, “If we overrule them, it would damage our republic forever,” he added.

ALSO READ: US violence: 1,400 arrests in 17 cities during protests against death of George Floyd

Former US president Donald Trump announced his bid for the 2024 US Presidential Election on Wednesday. He...
Education

The internet is in a state of shock after the news of 4 youths from Gujarat with...
Crime

Al-Qaeda leader Ayman al-Zawahiri was killed in a CIA drone strike in Afghanistan over the weekend. It...
Crime

19 young children along with two adults were killed when a teen opened a fire at an...
International

No one knows much about Putin's private life and his daughters The world does not know much about...
News

After Taliban took over Kabul, Afghan Americans in the US protest against Joe Biden outside white house....
News

Twitter loses intermediary status in India which means that it will now be directly responsible for posts...
Inspiring

A 91-year-old man in the US was very surprised to find out that someone recently returned his...
International

Joe Biden took the oath of office on a massive book on Wednesday. All the people watching...
Load more