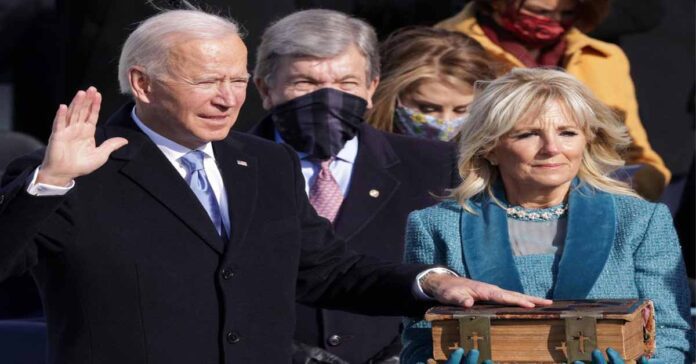 Joe Biden took the oath of office on a massive book on Wednesday. All the people watching the swearing ceremony had different versions about the massive book.

In the swearing ceremony of Joe Biden as the president of America, Jill Biden held it for him. The massive book is 5 inches thick and adorned with a Celtic cross on the cover. It has a long history with Biden’s family and has been with him throughout his political career.

This massive book has been in the family since 1893 and first started following Joe Biden when he was sworn in as Delaware’s U.S. senator in 1973.

This massive book is Biden’s family Bible. It re-emerged each time Biden was sworn in as a senator, and it was also used during his swearing in as vice president in 2009 and 2013.

Biden calls it a “family heirloom.”. Every important date of his life is in there.” The

the Bible gets a new date inscription every time a member of the family gets sworn in to office, according to Biden.

It is all the more important to Joe Biden as the president’s late son Beau also used the Bible for his own swearing-in ceremony as Delaware attorney general and he helped carry the Bible to his father’s 2013 ceremony.

Biden is the first Catholic to be elected president since John F. Kennedy, he has repeatedly referenced his faith throughout his time in office and the 2020 campaign, citing hymns and scripture that resonate with him. He regularly attends mass in Wilmington.

Al-Qaeda leader Ayman al-Zawahiri was killed in a CIA drone strike in Afghanistan over the weekend. It...
News

After Taliban took over Kabul, Afghan Americans in the US protest against Joe Biden outside white house....
International

US violence: When the lawmakers met inside to formally certify Biden's victory over Trump in the November...
International

Putin says he will congratulate Biden when the ‘legal processes’ are completed. Russian President Vladimir Putin has refused...
International