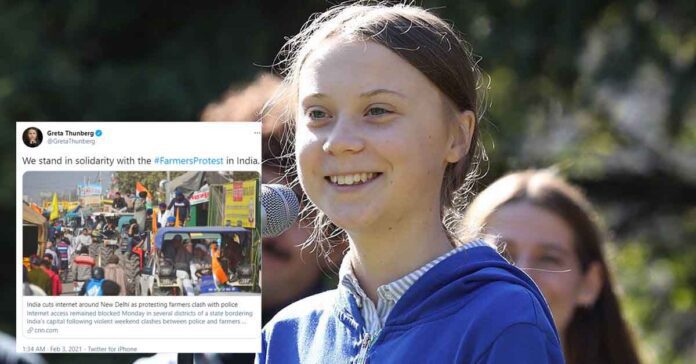 “We stand in solidarity with the #FarmersProtest in India,” tweeted Thunberg, along with a link to a story on the internet shutdown imposed around Delhi.

Earlier, Rihanna, too,shared the same story, saying, “Why aren’t we talking about this?! #FarmersProtest”

Internet services at Singhu, Ghazipur and Tikri borders – the three main sites in the farmers’ protest against the three farm laws were suspended on Saturday, and it is informed that the blockade will be in effect at least till Wednesday evening.

The suspension of mobile internet services has also been extended till 5 pm on Wednesday in seven districts of Haryana, according to an official statement.

Farmers have been protesting against the three contentious agriculture laws near the borders of Delhi for more than two months now. While the protesting unions have demanded a repeal of the laws, the government has offered to suspend the laws for 18 months and form a committee to resolve the issues.

On 26 January, violence erupted in parts of Delhi during the farmers’ Republic Day tractor rally.

KCR Press Meet Highlights: Telangana CM K Chandrashekar Rao Says He Will Not Be a Part of...
Judiciary

Journey of farmers protest was a sequence of controversies during the year-long farmers' movement. The year-long movement...
Activism

Union Minister Ajay Mishra's son, Ashish Mishra, who is accused of killing farmers, did not show up...
News

Lekhimpur Violence: The government has promised to pay a compensation of Rs. 45 Lakh to the kin...
News

Priyanka Gandhi was arrested by UP Police, she questioned the police as to why the Union Minister...
News

Around 40 farmers' organizations have called for a 'Bharat bandh' on Monday. The protest began at 6am...
News

Disha Ravi, a 21-year-old Bengaluru activist, was charged with sedition by the Delhi Police. A day after...
Load more