Tagore composed more than 2,000 songs and penned a large number of poems, stories, dramas, and novels. His works “Gitanjali” and “Jeevan Smriti” are still cherished today. 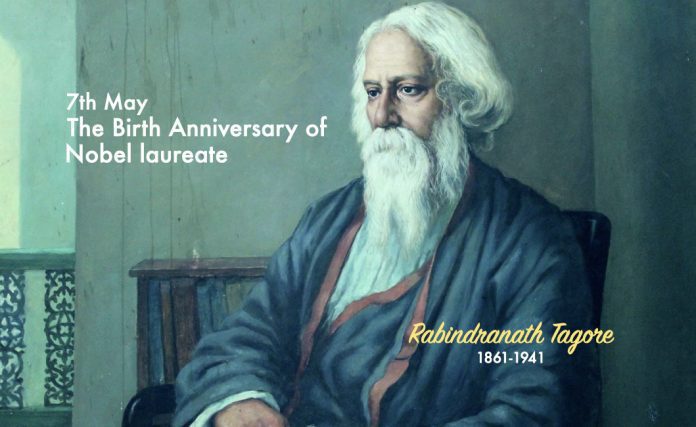 Remembering Ravindranath Tagore on his birth anniversary. In this article, we take you through the journey of Rabindranth Tagore as a poet, musician, writer and even a painter, Rabindranath Tagore, one of the greatest minds of India.

Rabindranath Tagore was one of the most admired icons of Indian literature. Tagore penned many novels and short stories with influential female characters. He was an author ahead of his time.

His poems at first had a blend of spiritual and romantic notions. He later spoke about the colonized people of India. Tagore thought deeply about the impact on the social and political thought trends in his times.

He may not be physically in our midst but he is still immortal. He was popularly known as ‘Gurudev’ or Bard of Bengal.

Tagore composed more than 2,000 songs and penned a large number of poems, stories, dramas, and novels. His works “Gitanjali” and “Jeevan Smriti” are still cherished today.

Tagore came from a notable Brahmo family and played a major role in introducing Indian literature to the world.

On his 159th birth anniversary, let’s know some rare facts about him.

Tagore wrote his first verse in poetry at the age of eight. At the age of 16, he published a collection of poems under the pseudonym Bhanusimha. He began writing short stories and dramas under his own name regularly and contributed to Bharati, a family magazine.

Rabindranath Tagore was not only the first Asian to win a Nobel prize, but also the first Non-European to mark his prominence in literature.

He Made a School From His Nobel Prize

Preface of Gitanjali is Written by W.B. Yeats

The preface of Tagore’s most acclaimed work, Gitanjali, was written by another greatest poet of the 20th century, W.B. Yeats.

Tagore took up drawing and painting, at the age of sixty. Many of his works were  put on display throughout Europe. He was red and green color blind.

Nobel Prize of Rabindranath was Stolen

Tagore’s Nobel Prize medal was stolen in a theft at Shantiniketan in 2004. It was replaced by The Swedish Academy again in the form of two replicas, a gold and a silver.

In Conversation With Einstein

Tagore was once invited by Albert Einstein at his home. They are supposed to have met many times. The two discussed about religion and science and their chat has been documented in the “Note on the Nature of Reality”.

Tagore Worked on All Genres

Tagore wrote novels, short stories, poems, essays, verses, dramas, songs, and a lot of other stuff. He is believed to have worked on almost all kinds of genres.

Tagore was Knighted Once

King George V of England knighted Rabindranath Tagore in 1915 for his great contribution in the field of literature. Tagore renounced his title, in protest of the tragic massacre at Jallianwala Bagh in 1919.

Sania Mirza, becoming the country's first Muslim woman and the State's first IAF pilot. She is a...
Inspiring

July 19, On the eve of Balamani Amma birthday, Google celebrates her 113th birth anniversary with a...
Inspiring

Indian Army has created a history by appointing their first woman officer in the Army Aviation Corps...
Inspiring

A Tamil Nadu man paid one lakh rupees as coins for his dream bike in a showroom...
Health

Dr. Langeh informed that the COVID patient from Love You Zindagi viral video died, through a tweet. The...
Inspiring

International Women's Day, 2021 turned unimaginable, unforgettable one to Archana Kevat. She never expected that her one...
News

Woman Police Constable on traffic duty with a baby in her arms, spotted in chandigarh. Video goes...
Load more