PM Modi Himself Counted 30 out of 60 Scams of Nitish Kumar: Tejashwi Yadav 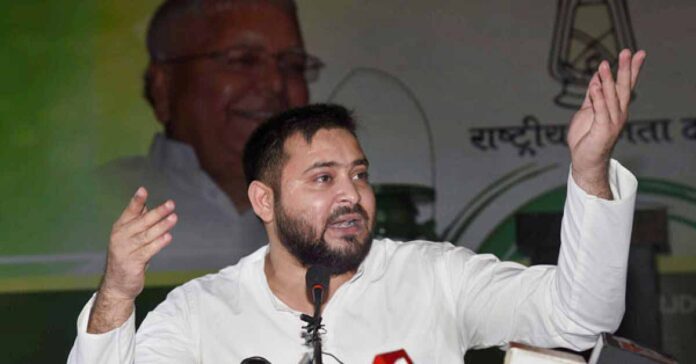 Tejashwi Yadav said that out of 60 Scams of Nitish Kumar, PM Modi Himself Counted 30 and that there are many thousands of crores of scams including Srijan scam, Paddy scam, Toilet scam, Scholarship scam, even after that.

Prime Minister Narendra Modi is supposedly going to address four public meetings on Sunday to promote the Bihar Assembly elections. The political temperature has risen as the second phase of polling is just two days away.

Leader of Opposition Tejashwi Yadav released the video of PM Modi levelling serious allegations against the current Chief Minister Nitish Kumar during the last election, in his latest attack on ruling BJP-JDU.

Sharing this old video, Tejashwi wrote – “So far, 60 big scams worth 30000 crores have happened during the rule of the Nitish ji, out of which 33 were counted by the Honorable PM Modi himself 5 years ago. Hear yourself…Even after that, there have been thousands of crores of scams including Srijan scam, Paddy scam, Toilet scam, Scholarship scams.”

Bihar has just completed the first phase of voting. The second phase voting will be held on November 3 and the final phase will be on November 7, while the results will be announced on November 10.

PM Modi in his election campaign lashed out at the RJD in a rally in Muzaffarpur, Bihar. The PM had alleged that if the opposition RJD-Congress-Left would come to power not only the government jobs, but also the private companies giving jobs will run away from Bihar. PM Modi had called Tejashwi Yadav as the crown prince of Jungle Raj.

Addressing the rally in Muzaffarpur, PM Modi said that the people have to think over during these times of an epidemic, and the opposition on the other hand, then it be a jungle Raj and the people of Bihar will be hit double the time.

Ex-IPS officer Sanjiv Bhatt was arrested on Tuesday, 12 July by the Gujarat Police in the Gujarat...
Load more