Modi’s demonetization was a big flop show. Do you know why? 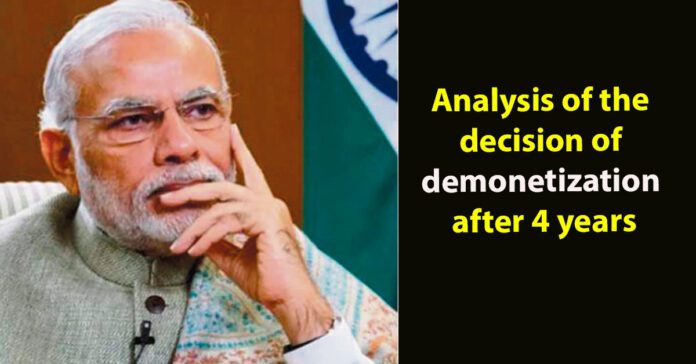 One of my friends during demonetization said that demonetization is a very good decision taken by PM Modi, now all the rich and big shots will be upset, , they will have to burn crores worth black money now. All of us know that the scene was just opposite to that.

Now even after four years after demonetization, the same friend of mine says Demonetization has helped India become a cashless society.

Demonetization has become meaningless as 99% notes have been returned to the bank which clearly indicates the main objective of the move has not been achieved.

Surprisingly, the total value of counterfeit money identified after April, 16 being just 41 crore, nothing much seems to be achieved on this front too.

On the other hand, India’s GDP growth fell by 2% with GVA falling more than 3%.

After all these failures, the government very brilliantly said that the main objective was to expose the vast amount of black money to that of forcing India towards a cashless society.

Talking about going cashless, the sudden boom in the digital transactions has ended with the usage of cards and mobile wallets coming back to the pre demonetization level. The government had no role to play in it.

All this clearly tells us that demonetization was a big failure. Also proving that many people in India have too much faith in the PM so they keep on justifying whatever action he takes.

Would there be a day, when PM Modi accepts that demonetization to be a failure? If he accepts his mistake there would be no benefits, but his supporters would have nothing to argue for.

Several supporters of PM Modi have justified the move saying in the long run the nation will be benefitted. I would like to tell them that ‘in the long run we will all be dead’

In the end I would like to reiterate that the intention behind demonetization was wrong. There was no research done and no vision on the intended result. The mission on what the issue they were trying to solve was not clear.

Finally, it was a publicity stunt as always which was meant to impress the public at large that there is a PM who can take hard decisions.