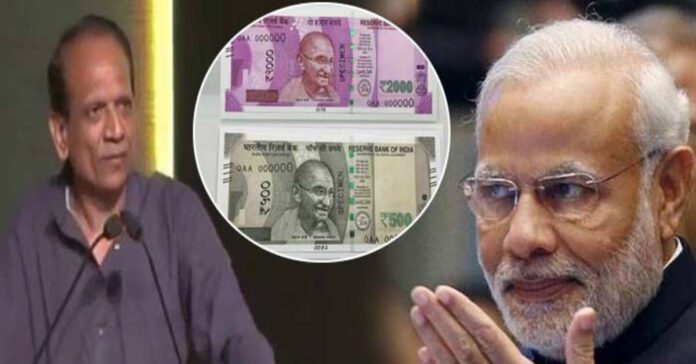 Anil Bokil, ever heard this name? He is the man behind the idea of Demonetization. Anil Bokil, is a 59-year-old, founder of Pune-based think tank called ArthaKranti Pratisthan.

He is the one who gave the idea to ban 86% all currency notes to the Prime Minister Narendra Modi.  Blindly, the idea was carried over not considering certain facts that our economy is largely dependent on the informal sector where cash dealings are normal.

Bokil has been a proponent of largely cash-free economy theory since 1999. He is a mechanical engineer by profession. He has been an employee, employer, entrepreneur, economic theorist and activist” on ArthaKranti website. He hails from Latur in Maharashtra.

He pitched the DeMo idea, which later turned out to be disastrous for the economy, largely believed to be one of the reasons for slowing growth since, to the then Gujarat CM Modi in 2013 in what was supposed to be a 9-minute presentation. However, the meeting went on for 2 hours and a written proposal was also sought from the activist.

“It is a surgery done without administering the patient the dose of anaesthesia,” Bokil said that the whole idea was about the exercise to weed out big denomination currency notes in order to check the menace of black money.

Bokil, who is a “mechanical diploma holder by education” and an “entrepreneur in full sense of the world”, claimed he even made the presentation to then Prime Minister Manmohan Singh, before he reached out to Modi in 2013.

In his various interviews with news publications, Bokil claimed he was not in favour of going completely cashless. “Some cash will have to be there, but we need to set the bar at Rs50. For a country like us where 70% of the population survives on just $2 per day, why do we need currency notes upwards of Rs100?”