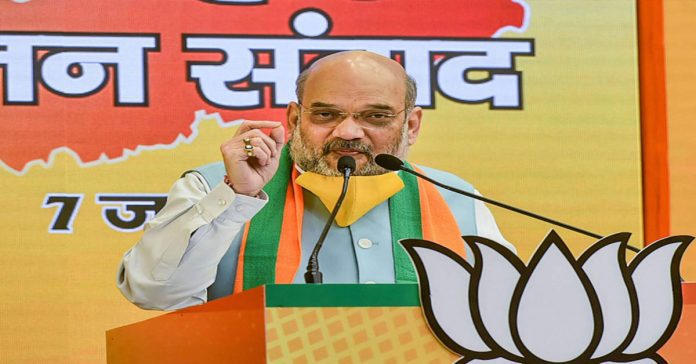 JD(U), BJP and the LJP run an alliance government in Bihar are on the run for the Assembly elections due later this year.

At Non-election rally, Union home minister Amit Shah said that the virtual rallies being organised by the BJP were to bring the country together in the fight against the Covid-19 pandemic, on Sunday.

“This is not an election rally. This is a virtual rally to motivate the public against the Covid-19 pandemic,” he said during the Bihar Jansamvad rally. “I want to salute the crores of corona warriors who are fighting against the virus by risking their lives. Health workers, police personnel and others, I want to acknowledge their contribution.”

Though the former BJP national president speaks about motivating people bu the hidden agenda  is to sound the bugle for assembly election later this year in Bihar where the JD (U), BJP and the LJP run an alliance government.

Shah went on to list the achievements of both the central and Bihar government, attacked the opposition in the state and touched upon the touchy issue of the return of migrants.

“The elections are there. I have full faith that the people of the state will vote Nitish Kumar to power with a two-third majority and help form the government again,” said Shah, after he had spelt out statistics of work done in the state.

Shah defended Centre’s handling of the migrant crisis during the lockdown. “I appeal to all people who returned from their workplace that keep yourself aloof from those elements who are out to misguide you,” he said and saluted their contribution in nation building.

“The country respects you. Everybody knows that developed states and development in the country would not have been possible without your sweat. Yours have been an important contribution in the development of the nation.

However, those misguiding you, don’t know your value,” he said in an obvious reference to appease close to 21 lakh migrants who returned to Bihar during the lockdown.

“There were certain disturbing pictures during the course of their return that gave us pain, but the Centre gave Rs 1,100 crore for their food, we transported 1.25 crore people to their respective state, besides providing Rs 11,020 crore package for the poor by way of different schemes and foodgrains worth Rs 6,000 crore.

What did you do? Where were you, Delhi or Bihar,?” he asked taking a swipe at leader of opposition in Bihar assembly Tejashwi Prasad Yadav, who early in the morning beat utensils in protest against the virtual rally.

“Some people welcomed our today’s virtual rally by clanging ‘thalis’. I am glad they finally heard PM Modi’s appeal to show gratitude towards those fighting Covid-19,” he said.

Shah praised the duo of Bihar CM Nitish Kumar and his deputy Sushil Kumar Modi “for leaving no stone unturned” to extend relief to the migrants.

The government spent Rs 5,300 per person at a quarantine centre,” the former BJP president said and explained how the Centre spent its Rs 1.25 lakh crore package to the state announced by PM Narendra Modi before 2105 assembly polls.

PM Modi had announced that the development of the country cannot be complete without progress in eastern states and it is his commitment that several projects in different sectors are underway in Bihar as well.

“Bihar has moved forward under Nitish-Sushil Modi at a growth rate of 11.30 %, from a budget outlay of Rs 2,300 crore during RJD to a budget outlay of Rs 2.11 lakh crore under Nitish-Modi, from a reach of power to only 22% households to 100%, from 34% roads to 96% roads and from a negative industrial growth rate to a 17% industrial growth rate and from strong arm to a politics of development. We have moved away from lantern age to LED age,” he said.

Shah also said that several crucial issues which no earlier government had dared to touch in 70 years were resolved in the first year of the Modi government’s second term as he referred to the controversial citizenship amendment law, the abolition of triple talaaq and the scrapping of Article 370 in Jammu and Kashmir.