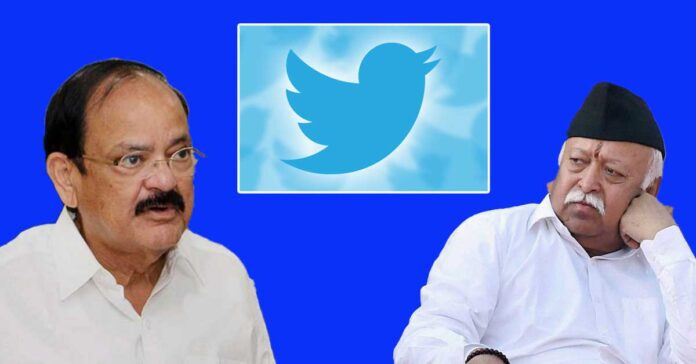 The blue tick of Mohan Bhagwat, Chief of the Rastriya Swayamsevak Sangh and few more leaders are also removed. Twitter set into action on Saturday.

Twitter has removed the blue tick badge from several RSS leaders over the past days. These accounts were given verified blue tick badges in 2019 by Twitter.

Twitter, the micro blogging website is recently in the news for not complying with the rules of the Indian government. Surprisingly, in a new provocation, blue tick badge of the personal handle of Vice President of India was removed on Saturday.

However, objections were raised, by the officials of the Vice-President’s office. Twitter restored the blue tick within a few hours.

ANI, a news agency reported that the verified status had been removed from @MvenkaiahNaidu for “inactivity” “The personal account of Venkaiah Naidu was inactive for six months and the blue badge has gone” an official from the Vice-President’s office quoted this.

On the contrary, the accounts of Former Union Ministers Arun Jaitley and Sushma Swaraj had stayed verified long after their death in 2019.

ALSO READ: FB, Twitter and Insta may not work in India from 26th May

Twitter has been down for many users around the world after the micro-blogging site try to log...
Business

Elon Musk launches Twitter poll: Should I step down as CEO?

Twitter chief Elon Musk launched a poll on social media network on Sunday, asking whether he should...
International

Apple and Amazon are once again running advertising on Twitter. Elon Musk independently verified that Apple has resumed...
Business

Twitter Outage: Several users complained that could not log into the microblogging site on Friday morning. When...
Load more