FB, Twitter and Insta may not work in India from 26th May 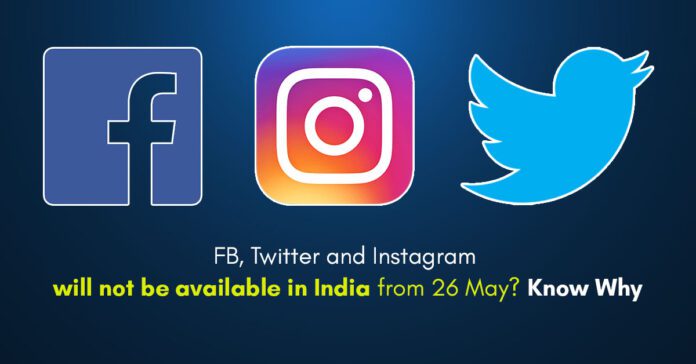 Indians may lose their access to the media giants Facebook, Twitter and Instagram from 26th May. It is said that these media giants were issued notices by the Centre with a warning three months ago.

According to the reports of NDTV, government sources informed that the social media giants need to comply with the new set of rules.

Earlier in the month of February, the Ministry of Electronic and Information Technology gave a three month deadline to all the social media platforms. Subsequently, the government insisted that these platforms must comply with the new IT rules 2021. The end date for the deadline is May 25.

Apparently, none of the social media platforms appointed any officials till now. However, some companies have asked for a six-month deadline. These companies quoted that they need to get instructions from their head office in US.

In the new laws there would be an oversight mechanism. this would include representatives from Ministry of Defense, I&B, Home Ministry, IT and Women and Child development.

This mechanism will have “suo motu powers” to call on complaints of violation of the code of ethics, whenever it wants. The government will also appoint an officer in the rank of a Joint Secretary or above as the “authorized authority”. He will be authorized to directly block the content.

Moreover, if an appellate body feels that the content is violating the law, then it can send the content to the government – controlled body to block the content.