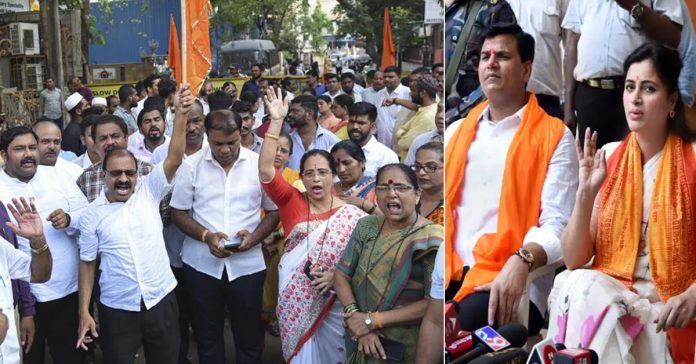 Hanuman Chalisa Row: The Shiv sena workers broke the barricades and tried to enter the premises of the politician couple’s residence in suburban Khar on Saturday morning. However, the police brought the situation under control. They stopped the shiv sena workers from going further.

Subsequently, the police increase the security outside the chief Minister’s house to avoid crowding. In addition to that, they deployed more police personnel outside the couple’s apartment. Earlier, shiv sena workers staged protests and dared the couple to step out of the their residence.

Navaneet Rana and Ravi Rana, the couple are independent legislators for the Vidharbha region in Maharashtra. They announced that they would recite the ‘Hanuman Chalisa’ outside ‘Matoshree’, the residence of Maharashtra Chief Minister Uddhav Thackeray. They planned to recite it on Saturday at 9.00AM.

Added to that, they became aggressive on the politician couple’s decision. They gathered in large numbers outside the apartment of the Amravati MP Navneet Rana and her husband MLA Ravi Rana in Mumbai this morning. They shouted slogans against the couple.

#WATCH Shiv Sena workers protest outside the residence of Amravati MP Navneet Rana in Mumbai as the MP plans to chant Hanuman Chalisa along with her husband MLA Ravi Rana outside 'Matoshree' the residence of #Maharashtra CM Uddhav Thackeray pic.twitter.com/OR7CQQpWlk

Despite notices issued by Mumbai Police, not to disturb peace and harmony of the state, the couple were firm that they would recite ‘Hanuman Chalisa’ outside ‘Matoshree’.

According to NDTV, earlier, Ravi Rana had asked the Chief Minister to recite ‘Hanuman Chalisa’ on Hanuman Jayanthi, which he refused to do. Moreover, he suggested that if the CM recites then there would be peace in Maharashtra and get rid of the crisis.

ALSO READ: UP priest on fast unto death after booked for Hanuman Chalisa recital

In a tragic accident, two men got killed by a speeding taxi when they are trying to...
Governance

Hate speeches in India have increased after 2014. BJP is trying to control the damage but it...
Columns

Saffronisation of Education: Is it ideal or misleading? Interesting Facts

’Saffronisation of Education’ denotes to bring in change in the education just because of their trivial beliefs....
Governance

The Supreme Court will hear the Gyanvapi mosque case today. Earlier, on Tuesday, the court had directed...
Awareness

Elections in India have redefined the meaning of caste. Consequently, India rolls between caste and identity politics...
Governance

The Director General of Health confirmed that 31 people died in last 12 days in the Char...
Awareness

Future India Foundation is a nonprofit charitable organization. The organization has conducted a discussion among a group...
Governance

Loud speaker Row: MNS Chief Raj Thackeray in his speech reiterates his deadline of 3 May for...
Activism

Hanuman Chalisa Row: Shiv Sena in its mouthpiece 'Samana' on Monday alleged that the BJP is using...
Load more