The Apex court made it very clear that irrespective of married or unmarried a woman has the right to choose for abortion. 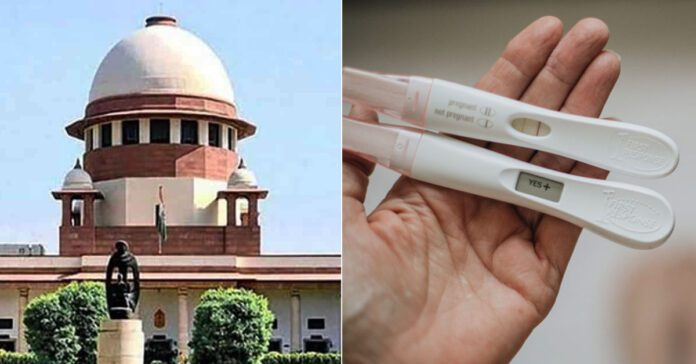 The Supreme Court gave a massive judgment today. The Apex court (SC) grants abortion right to all women till 24 weeks of pregnancy and acknowledged marital rape.

Adding to that, the Supreme Court entitled a safe and legal abortion process. The Apex court made it very clear that irrespective of married or unmarried a woman has the right to choose for abortion.

The court ruled that under the Medical Termination of Pregnancy Act, marital rape also should be included.

The Court said, “Married women may also form part of class of survivors of sexual assault or rape. Ordinary meaning of the word rape is sexual intercourse with a person without their consent or against their will regardless of whether such forced intercourse occurs in the context of matrimony.”

Added to that the court said that the marital status of a woman cannot be a ground to deprive her of the right of abortion. Moreover,  unmarried women would be entitled to terminate an unwanted pregnancy within 24 weeks.

The court felt that there should not be a distinction between married and unmarried women under the abortion laws. It is “artificial and constitutionally unsustainable”. It perpetuates the stereotype that only married women are sexually active.

Furthermore, the judgment said that the consequences of an unwanted pregnancy on women’s body and mind “cannot be understated”. Stressing that the biological process of pregnancy transforms the body of women. The decision to carry pregnancy to full term or terminate it is “firmly rooted under right to bodily autonomy and decisional autonomy of the pregnant women”.

However, if women with unwanted pregnancies are forced to carry their pregnancies to term, the State would be stripping them of the right to determine the immediate and long term path that their life will take, the judgment added.

The landmark verdict came on a petition by a 25-year-old unmarried woman. The woman had appealed against a Delhi High Court order.  She informed that she is not entitled to abortion under the Act as she was unmarried, and the pregnancy followed a consensual relationship.

Nalini Sriharan, is the longest- serving woman prisoner in India. She is one of the seven convicts...
Judiciary

Justice D Y Chandrachud was appointed as the 50th Chief Justice of India (CJI). He will serve...
Crime

The Telangana high court (HC)gave relief to the managements of pubs and similar establishments in the city....
Judiciary

Senior lawyer, Mukul Rohatgi declined the centre’s offer to return as the Attorney general of India. He...
Judiciary

Kerala High court slammed youngsters for spoiling the culture in the society and disturbing the sanctity of...
Judiciary

Smriti Irani and her daughter are not owners of Goa restaurant Silly Souls or its land –...
News