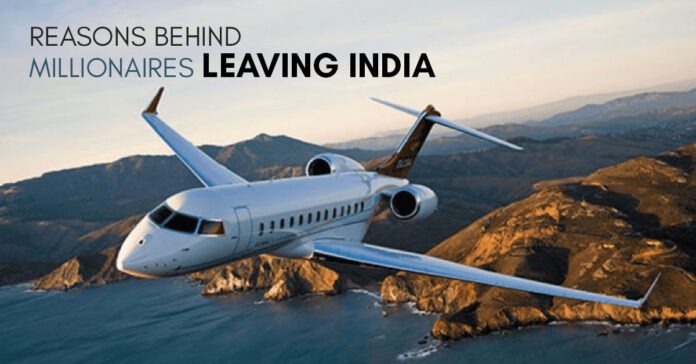 Yes, more and more rich Indians are leaving India for better Investment and opportunities. According to the Global Wealth Migration Review, the statistics show a startling effect on the minds of Indians.

If you guessed that only the corrupt scamsters are leaving India, then you are absolutely wrong. Even if this is the case, then it is the failure of the government, as they are leaving with the country’s wealth.

63% – increase in interest in investment migration

6800 – Ultra-high net worth individuals moved to other countries.

Earlier, Indians migrated to other countries for education. The government had huge concern for the brain drain. Many policies came up for the same.

After 2014, the situation worsened. The brain drain did stop instead became the aim of the educated youth of this country. Anyone who pursues engineering, aims to get a job in Europe or US.

The main reasons for such an attitude in the Indians is because of:

Economy is in doldrums

The economy is in doldrums, hence, many businesses suffered the worst. In fact after the mismanagement of COVID-19, people lost hope in the government, as there found no means of coming back to normal.

Unpredictable policies of the government such as Demonetization and the introduction of GST has broken the hearts of the business men. The policies are introduced by the present government without prior information.

The impact of these policies on the businesses is very high.

The highest court and the other government agencies like NIA, CBI and IT departments have become puppets in the hands of the present government. Businesses received set back due to the intervention of the Supreme Court in trivial matters.

It becomes important to mention that Ambani and Adani are the business men who receive the support by the government.

Mismanagement of the COVID-19

Lockdown in India was announced suddenly, without proper planning. The plight of the migrant workers was so pathetic. Many people died on their way back home. People in India came to know the true administration policies of the present government during this time.

The COVID-19 pandemic was taken very lightly. The heads of the government pacified people by instructing them that Corona was curable by lighting lamps, Clapping hands, making noise with the plates, using cow urine and cow dung, above all practicing Yoga.

However, Corona did not listen to the heads of the government but exposed all of them with the second wave. The whole world came to know the mismanagement of COVID-19.

Many people died due to lack of oxygen, hospital beds and good medical facilities. Most of them lost their loved ones. The government remained undeterred. Meanwhile, the leaders were busy campaigning for the elections.

Even the mismanagement of vaccines added to this. People lost hope in the government and its policies. Hence people are migrating from this country in search of greener pastures.

People are tired of listening to long speeches of nationalism and they are no more interested to live life under radicals. Anyways, reservations play an important role in the lives of the people in India. The rich or the upper caste do not find anything worthy to live here.

The so called nationalists spread their ideologies and arouse people in the name of religion and rule the country by oppressing the poor. There is no hope left for the youth as India is very far from the rest of the world.

Kothapalli Satish Kumar, who projects himself as a Bharatiya Janata party (BJP) leader was arrested on Tuesday...
News

BJP leaders are sharing a video of Narendra Modi waving at the crowd at Kolkata rally. It...
Columns

India has a vision 2047 now, that is hundred years of Independence. According to the ruling party...
News

Seema Patra, a retired IAS officer's wife was a member of the national working committee of the...
News

The BJP MLA from Goshamahal, was arrested on Tuesday. The police filed a FIR for making controversial...
News

"BJP MLA Raja Singh arrested for his alleged derogatory comments against Prophet Muhammad. According to ANI, and...
News

Stand-up comedian Munawar Faruqui's show in Hyderabad was successful with the help and cooperation of the Telangana...
News

Bilkis Bano Case: 5 out of 10 members of recommending committee belong to BJP

The release of the 11 convicts in the Bilkis Bano case has angered everyone. The BJP has links...
News

BJP government silent over the attack on Salman Rushdie, Why?

The Modi-led BJP government is silent on the attack on Salman Rushdie. Earlier, BJP stood up for...
News