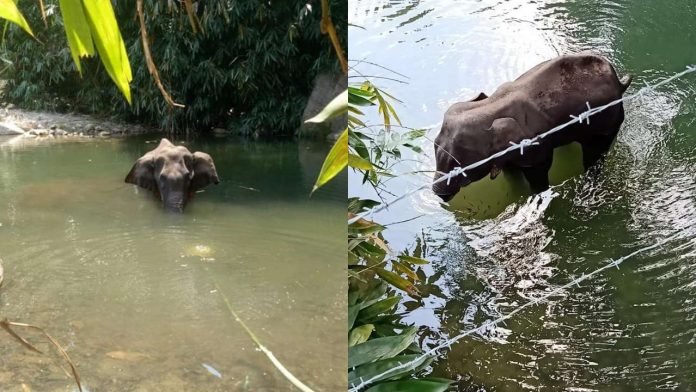 A pregnant elephant was fed a cracker- stuffed pineapple and the police in Kerala are on the lookout for people who have planned this brutality.

An pregnant elephant death after locals fed her a pineapple stuffed with crackers, in Kerala. According to a recent development, a case of unnatural death in relation to the incident was registered in the Thiruvazhamkunnu forest station.

The police are making efforts to collect information about the sale of the crackers that were stuffed in the pineapple. The cops are also interrogating the people living in Mannarkad and Velliyar. No arrests have been made yet.

According to Mohan Krishnan, the section officer who shared the incident on social media, the elephant died while standing in the Velliyar River. Though the crackers exploded in its mouth the tusker did not injure anyone .

An official said that the elephant suffered serious injuries in its tongue and mouth due to the explosion. According to the post-mortem report, the elephant died due to asphyxia as the water had gone to its lungs and trachea.

Bharat Jodo Yatra, hundreds of party workers and followers accompanied Rahul Gandhi on Wednesday. They are all...
News

Congress MP Rahul Gandhi resumed the Bharat Jodo Yatra from Kochi which entered day 14 on Wednesday. He was...
News

Bharat Jodo Yatra resumes from Kollam after a day’s rest

Kerala High court slammed youngsters for spoiling the culture in the society and disturbing the sanctity of...
Awareness