Girls should not be given mobile phones, UP Women Commission Member 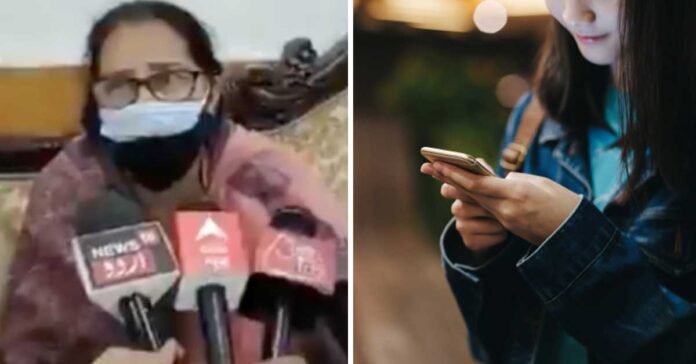 “Girls should not be given mobile phones. Girls talk with boys on phones for hours and later elope with them. Their phones are not even checked and family members are unaware of these things,” UP Women Commission Member Meena Kumari.

The above shocking statement is spoken by a member of the UP Women’s Commission on Thursday said that girls should not be given mobile phones. If given, constant monitoring should be there about their movements. She feels that this the solution to keep the girls safe from getting raped.

BIZARRE comment by Meena Kumari, a member of the UP Women Commission.

“Girls should not be given mobile phones. They talk to boys and later elope with them.”@NCWIndia @sharmarekha ji, do you approve of this statement? pic.twitter.com/HrSICrGL0l

She also said that parents, especially mothers have more responsibility. Mothers’ should monitor their daughters.

However, UP women commission Meena Kumari clarified her remarks later. She said that she spoke about the girls from villages don’t know ‘how to use phone in the right way” Furthermore, she said that girls use phones to make friendship with males and then elope with them. She further added that smartphones are also being used to watch inappropriate content.

When Meena Kumari was questioned, how mobile phones are linked to rape? She said “ On a daily basis, I hear complaints of at least 20 women and 5-6 cases are related to friendships on phones and then they run away. In some cases, girls are lured and then sexually abused”

UP Man kills tenant for 1 crore, chops body into 4 pieces

A 35-year-old man from Modinagar, UP was arrested for killing a PhD scholar. He had been his...
News

A passenger in the Neelanchal Express train (Delhi-Kanpur) dies due to an iron rod piercing his neck...
Crime

Students disrespecting teachers and passing lewd comments have become a fashion now. In a recent incident in...
News

In a viral video, two woman court lawyers from Kasganj, UP got into a pretty ugly fight....
News

A video is viral on social media. The caption given to it is “Tandav". A woman comes...
News

The Veteran politician, founder of Samajwadi party, Mulayam Singh dies at 82 while undergoing a treatment at...
News

Bureaucrat breaks down after meeting an injured In Accident

A video which is going viral on social media shows a bureaucrat Dr. Roshan Jacob breaking down...
Judiciary

UP: Two teenage sisters found hanging from a tree in Lakhimpur Kheri

Two teenage sisters were found hanging from a tree in a sugarcane field in Lalpur Majra Tomoli...
Load more