Flat pack coffins help the environment, is the in thing funeral costs and the grieving process differ 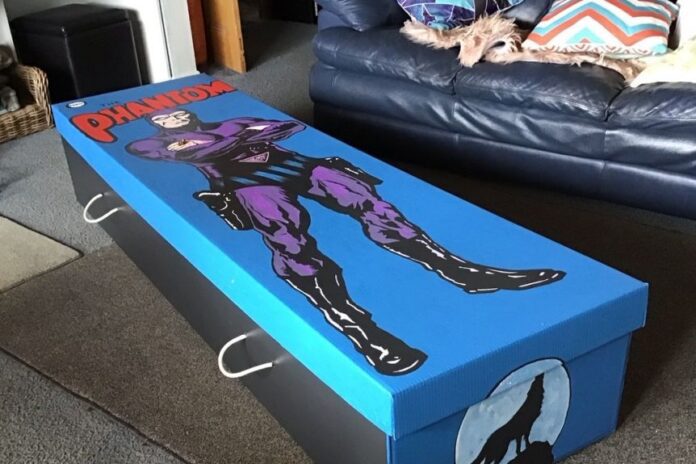 Flat pack coffins: When there’s a death in the family and coffin has to be made then a cardboard coffin was a perfect choice and the in thing now. Especially for people who are really environmentally friendly.

The cardboard coffin is made out of bio board so it is a compostable coffin. The family members can actually paint on the coffin which would help them to grieve and heal.

The cardboard coffins are significantly cheaper, can be decorated easily and also come as a flat pack.

Another advantage is when someone dies the family feels so helpless. Though everybody would like to help them but nothing really can be done by anyone. If the family members paint the coffin, a layer of stress can be taken out of their life and be able to do something that reflected on that person. Talking about the design and taking suggestions about what to put on it, that process helps everyone.

These cardboard coffins are cheap, and it’s a really nice process of bringing people together to decorate it.

Death is quite morbid to many people, but through the cardboard coffins, it could be something that is celebrated.

The average cost of a funeral is around $4,000 and $20,000 in other countries and nearly the same in India. People may opt for a wooden coffin so that they can express how much they love the person.

But in another way it doesn’t always have to revolve around money, it could involve attention and care and kindness. The cardboard coffins are much lesser. The flat packs are able to be posted anywhere in the world.

“Great Indian Nautanki Company” is the name of a company which was given credit of corresponding of...
Business

BJP blames the Telangana government for conspiring to defame the central government. The protests started around 8.00...
Load more