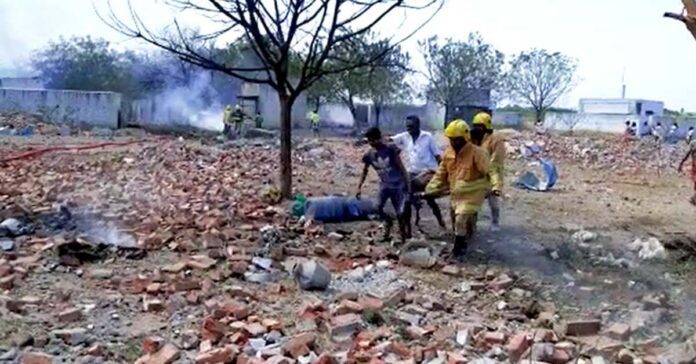 19 people are reported to be dead in the massive fire that broke out at a fireworks factory in Virudhunagar in Tamil Nadu on Friday.

It is said that the incident occurred during the process of mixing some chemicals. Unfortunately, the chemicals were being mixed to produce fireworks but then it led to the destruction of four cracker-making sheds.

As per reports more than 26 people sustained severe burns and were admitted to the Sivakasi government hospital.

Ten firefighters from various locations were rushed to the spot to douse the fire. However according to the official sources the death toll is likely to increase as the injured are critically injured.

The Chief Minister Palaniswami instructed the district authorities and medical experts to give the best treatment to the injured. He also asked the local administration to ensure families of deceased and injured are informed and necessary arrangements made.

He also asked the  district authorities to inspect such industries on regular basis.

Congress leader Rahul Gandhi also expressed condolences to the victims of the fire. He urged  the state government to provide immediate rescue, support and relief.

A grieving son was desperate to see his fathers grave, for which Google helped him find. Apparently,...
News

A mysterious blast in a moving auto in a communally-sensitive city of Mangaluru sent shock waves across...
News

According to News18 Tamil Nadu, more than 10 BJP functionaries were angry and walkout from the event,...
Inspiring

A Tamil Nadu man paid one lakh rupees as coins for his dream bike in a showroom...
Entertainment

Superstar Rajinikanth declared that he has no plans to enter politics. Subsequently, he dissolved his party, Rajini...
News