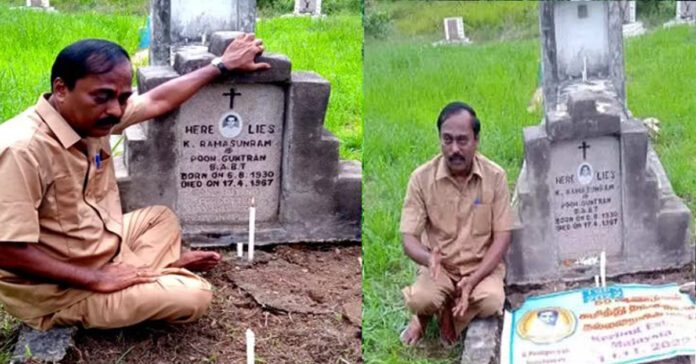 A grieving son was desperate to see his fathers grave, for which Google helped him find. Apparently, his father died when he was still in his mother’s womb.

In his desperation, this grieving son researched in Google and went in search of his father’s grave from Tamil Nadu to Malaysia. However he was successful in his attempt. He found solace after finding his father’s grave.

Ramasundaram migrated to Malaysia along with his wife Radhabai, many years ago. He took up a job as a teacher. Unfortunately, he died in 1967. His wife who was pregnant at that time, completed the funeral rites in Malaysia but returned to India mas the memories of her husband were haunting her.

6 months after her return to India, she delivered Thirumaran. However, Radhabai died after 35 years. Thirumaran is 56 years now. He lives in Tamil Nadu and is into social service now. He had a strong desire to at least visit his father’s grave.

In these days when people don’t take care of their old parents who are alive, it’s rare to find people like Thirumaran, who struggled hard to find his father’s grave.

The International Day for the Elimination of Violence against Women is observed on November 25th every year....
Business

Former US president Donald Trump announced his bid for the 2024 US Presidential Election on Wednesday. He...
Business

Meta layoff employees react on Linked In, What’s the Agenda?