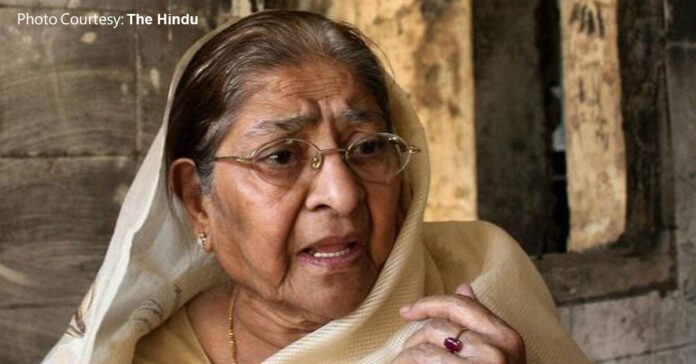 Zakia Jafri, wife of late Congress MP Ehsan Jafri from Gujarat State is now in the News. Ehsan Jafri was one among the 68 who were killed during the Gulberg Society massacre in February 2002 Gujarat riots. Zakia Jafri opposes Clean chit to Modi.

Clean Chit to Modi by SIT

Of late, The Special Investigation Team(SIT) gave a clean chit to the then Gujarat Chief Minister Narendra Modi. Zakia Jafri has challenged the clean chit given to the present Prime Minister in 2002 Gujarat riots. Senior advocate Mukul Rohatgi is appearing on the behalf of SIT.

Surprisingly, SIT filed a closure report which gave a clean chit to then Gujrat Chief Minister Narendra Modi and 63 others, including Senior Government Officials. The report said that there was “no prosecutable evidence” against them.

Interestingly, the report filed by SIT deals only with the massacre that took place at Gulberg society. Whereas, Zakia’s case is a pin criminal and administrative liability and accountability in approximately 300 incidents over 19 districts of Gujarat in 2002.

In addition to Zakia’s petition, there is another petitioner in the case. A group led by Activist Teesta Setalvad named Citizens for Justice and Peace.

The Supreme Court bench which consists of Justice A.M. Khanwilkar, Dinesh Maheshwari and C.T. Ravikumar said that it would like to go through the closure report as well as the magistrate’s reasoning while accepting it.

Kapil Sibal argued that the SIT’s closure report was not justified as certain prominent persons can be held responsible for the 2002 communal violence in Gujarat.

Furthermore, senior advocate and former Union Minister Kapil Sibal said that he too has been a “victim of Communal violence” and “lost maternal grandparents in violence that took place after the partition of India in 1947.”

Earlier, he argued that the issue goes beyond what happened at the Gulberg society. He reiterated that Ms. Jafri’s fight was about “law and order, administrative failure”. He added that she was neither interested in any “high dignitaries” nor convictions at this stage.

However, SIT responded to the petition and claimed before the court that it completed a probe before filing the closure report. “We will show you that we have faithfully investigated everything”.

Back in 2020, the UP Chief Minister Yogi Adityanath initiated a debate on changing the name of Hyderabad...
Columns

The central government is proposing a Bill to raise the marriageable age for women to 21 years. Probably,...
News

BJP MP Kiron Lal Meena demanded in the Rajya Sabha to declare Cow as the National Animal. He...