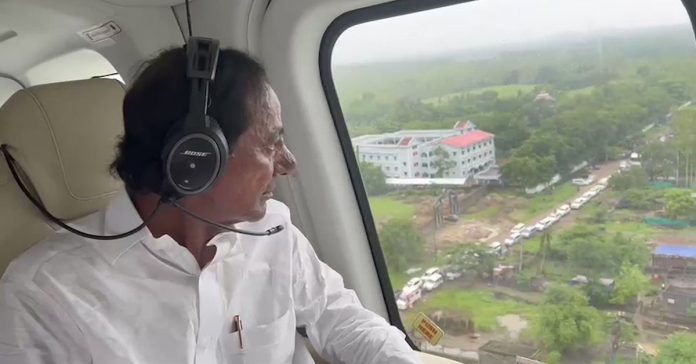 Telangana Chief Minister K Chandrashekar Rao took a tour to the flood-hit Bhadrachalam on Sunday. while speaking in a public meet, KCR made a weird comment calling the phenomenon of cloudburst a ‘foreign conspiracy’.

After the tour, the Chief Minister KCR said that the intensity with which there was rainfall and the floods in the state’s Godavari region were the result of a cloudburst, suspected to be a “conspiracy planned by other countries”.

After the tour, addressing the reporters, Mr. Rao said : “There is this new phenomenon called cloudburst. People say there is some conspiracy, we don’t know how far that is true, that people from other countries are deliberately doing cloudburst in our country at certain locations. In the past they did it near Kashmir, at Ladakh-Leh, then in Uttarakhand and now we are getting some reports that they are doing it in the Godavari region.”

However, a cloudburst is a sudden heavy rain, which usually means an extreme amount of rain over a very short period that can lead to flood.

Warning sere given right from when the water level reached 53 feet. It reached 70.50. However, the levels have come down to 60 feet on Sunday.

The Chief Minister personally visited the flood-hit areas. Thereafter, he performed “shanti puja” for ‘Gangamma’, Later, he went to Eturunagaram.

CM KCR held a review meeting with the ministers, MLS’s and the local officials.

Nepal: A massive earthquake of magnitude 6.3 hits Nepal in the early hours of Wednesday, November 9....
News

BJP denies all the allegations made by the ruling government in Telangana, TRS. The Telangana government accused...
Environment

Cyclone Sitrang hit Bangladesh on Monday. At least 11 people were reported to have died due to...
News

TRS leader and Chief Minister KCR is going to announce the details of the new National party...
News

What is a National Political Party? Can TRS become one?

KCR gifted a 6-seater jet by TRS, expected by Dasara

TRS is about to acquire a 6-seater jet plane for KCR, its party president and Chief Minister...
Load more