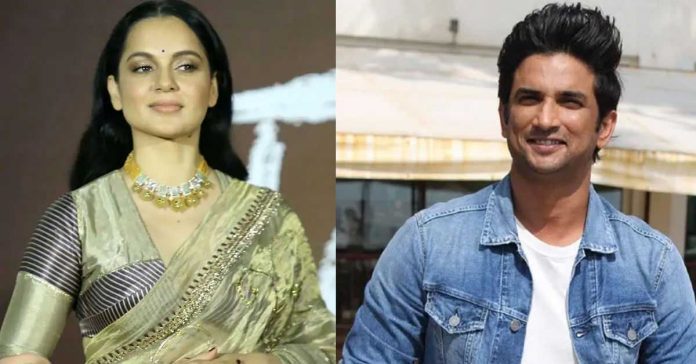 Sushant Singh Rajput was found hanging in his apartment in Mumbai on June 14. He was under stress and was depressed.

The country as a whole was in a state of shock when they heard about Sushant Singh’s death. His fans are still not able to come to terms even now and feel that he had not committed suicide and would like to know the in depth causes for his hasty step.

Besides this, his fans kept on sharing his images and videos to keep his memories alive and bring justice to this departed soul. Kangana also joined them to talk about Nepotism and Partiality in Bollywood, especially justice for Sushant.

As per the reports, Kangana said that she is all set to put her statement, but refused by getting any notice from the police for the case.

On Thursday, The Mumbai police have put a new call for the actress Kangana Ranaut for the late Sushant Singh Rajput death case. As for the previous reports, Kangana said that she is all set to register her statement. She has refused the news of receiving any notice or calls from the Mumbai Police.

She also said that the Mumbai Police had gone to her home in Mumbai on July 4 to record her statement and not on July 3, but her manager, Amrita Dutt has not accepted the letter.

When the cops had enquired about Kangana and asked for her contact number, the main head gave her own information.

Henceforth, the actress has been writing her statement online. Kangana’s hometown is located in Manali, and according to her sister Rangoli Chandel, who is also in charge of the actress, is assigned to give her statement on email.

Therefore, the Kangana Twitter team has also replied to the reports saying that she was called earlier for which they has shared screenshots of the message which Rangoli has sent to Mumbai police.

Kangana is all set to register her statement as she wants Justice for the late actor Sushant Singh Rajput.

Kangana has been very active as she has named few Bollywood A-listers for Nepotism and partiality in the industry after Sushant’s Singh death.

Mumbai cops have taken written a statements of 26 people during their investigation of the case so far. But fans are not satisfied.

Therefore, a fan of the actor has requested a CBI enquiry to solve his suicide case and to know the reason behind his death.

Actor Kangana Ranaut has got into trouble over her comment on Bilkis dadi, one of the Shaheen...
News