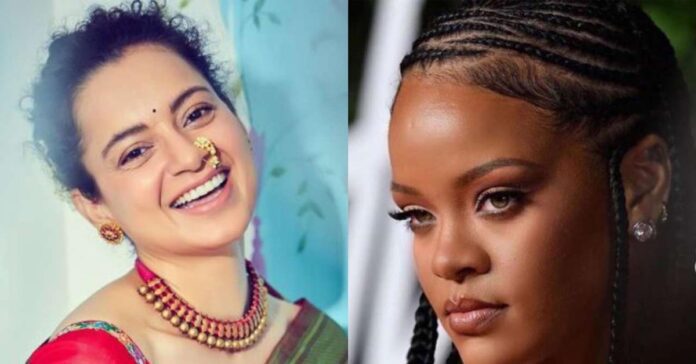 Kangana Ranaut is being massively trolled for calling Rihanna a ‘fool’ and a ‘dummy’. Kangana reacted to the popstar on Tuesday as she had tweeted in support of farmers’ protest.

On Tuesday, Rihanna had written to a news piece about the ongoing farmers’ protest on Twitter. Sharing the article, she wrote, “Why aren’t we talking about this? #FarmersProtest (sic).”

why aren’t we talking about this?! #FarmersProtest https://t.co/obmIlXhK9S

Rihanna’s tweet received massive support and it was widely shared. Internet users made the tweet viral as they felt that the issue will be highlighted on the global platform with Rihanna tweeting about it to her 100 million followers.

Kangana Ranaut as usual reacted to Rihanna’s tweet in her arrogant manner and used adjectives like ‘fool’ and ‘dummy’ to describe the international sensation. She wrote, “No one is talking about it because they are not farmers they are terrorists. She also added that these were the people who were trying to divide India, so that China can take over our countryand make it a Chinese colony much like USA… Sit down you fool, we are not selling our nation like you dummies.”

No one is talking about it because they are not farmers they are terrorists who are trying to divide India, so that China can take over our vulnerable broken nation and make it a Chinese colony much like USA…
Sit down you fool, we are not selling our nation like you dummies. https://t.co/OIAD5Pa61a

HOW DID THE INTERNET REACT?

After Kangana Ranaut insulted Rihanna on Twitter, she received massive trolling with some branding her a ‘Bhakt’. Internet users compared the social media followers of both the celebrities and mocked Kangana for messing with Rihanna, who boasts of a whopping 100 million followers, with her just 3 million followers. Some also said that Kangana is just “jumping” around to get fame by messing with Rihanna.

The good thing about Kangana's reply to Rihana is- at least she didn't call her 'Karan Johar ki chamchi.'

My heart goes out to all Americans, who'll waking up to realise that they've been colonised by China.#KanganaRanaut

Literally anything happens in any corner of the world#KanganaRanaut : pic.twitter.com/8xv264eTm0

Exactly, @rihanna is fame all over the world and Kangana is like jumping around like kangaroo to get fame. #WeSupportFarmers #FarmersProtest #RihannaSupportsIndianFarmers https://t.co/5y1TjecMM3

Telangana CM KCR kickstarted the protest in Delhi against the center regarding the paddy procurement policy on...
Entertainment

This photo has been photoshopped, of singer Rihanna holding a Pakistani flag is being shared on social...
News

How did the Indian government react to the tweets of Rihanna and others?

The Indian government has reacted strongly on the issue of the farmers' protests after tweets made by...
Entertainment

Actor Kangana Ranaut has got into trouble over her comment on Bilkis dadi, one of the Shaheen...
Entertainment