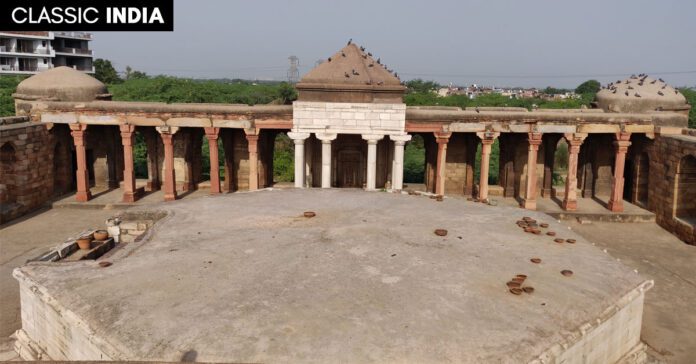 Sultan Ghari is India’s First Islamic Mausoleum (Tomb). It is built by Sultan Shams-ud-Din Iltutmish of Slave Dynasty over the remains of his eldest son and heir-apparent, Prince Nasiru’d-Din Mahmud in 1231.

It lies to the southwest of the Qutub Minar, near Mahipalpur. (previously known as Malkapur)

Sultan Ghari is India’s first Islamic mausoleum (Tomb) and even our subcontinent’s second. (first one was Sultan Qutbuddin Aibak’s tomb in Lahore).

The Story behind Sultan Ghari

Nasiru’d-Din Mahmud was a brilliant tactician. Furthermore he was a better negotiator. Above all was instrumental in increasing the reach of the empire to the Far East.

When he was serving as the governor of Bengal, Iltutmish gave him the title of ‘Malik-us-Sharq‘ {King of the East}.

Iltutmish made him the heir-apparent in 1227. Not long after, his appointment (in 1229) he died suddenly (with reasons unknown).

Following his death, the grief stricken Sultan, decided to make a grand mausoleum for his favorite son. Subsequently, he constructed Sultan Ghari, on top of an existent Pratihara era Hindu Temple (700-1000CE).

Feroz Shah Tughlaq repaired the tomb in his reign. He added the colonnade of marble pillars in front of Mihrab.

An inscription on Sultan Ghari’s main gateway has the name of Sultan Iltutmish and the year 1231.[Delhi and its Neighborhood (1974) – Y. D. Sharma]

Sultan Ghari is a monumental tomb. Instead of isolated position, it is built in the manner of a walled enclosure. The courtyard is of sixty-six  square feet.

It is like a fortress with a courtyard, built over a raised plinth of certain height with rubble masonry.

The Cenotaph of the prince is located in a central underground octagonal chamber inside the courtyard. He is the “Sultan of the Cave”. Therefore it is Sultan Ghari.

The Octagonal vault has stone stairs. On one side, they lead onto the roof and on the other side they descend into the cave. The roof is of thick lime–concrete.

According to Percy Brown – (Indian architecture [Islamic period] 1956) the central platform was designed to support a superstructure, probably a pillared pavilion with a pyramidal roof. The probable superstructure perished. Hence it looks incomplete today. 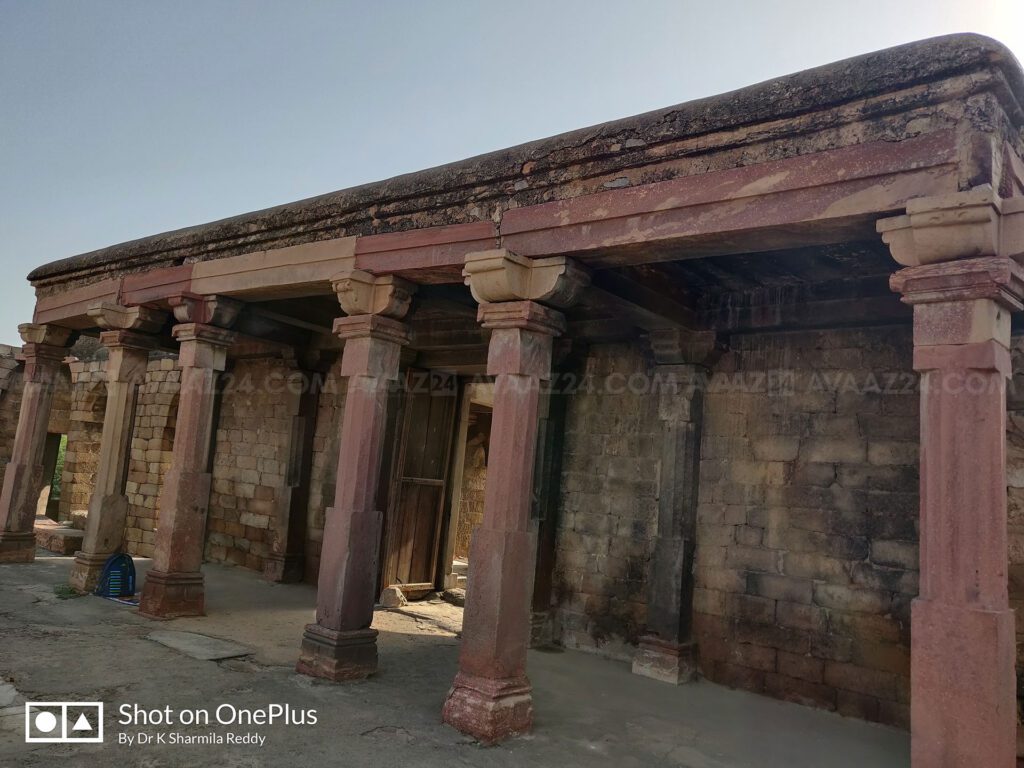 The entire mausoleum of Sultan Ghari has a corbel arch construction. Before the introduction of True Arch of Romans, Corbelled arches were frequent in India.

First true arch is found at Tomb of Balban (Darul Aman) another Sultan of Slave Dynasty. [Not to confuse with Darul Aman of Ghiyas-ud-din Tughlaq].

Want to see how a true arch looks like? Look at the entrance of Darul Aman

Inside the Ghari there are three cenotaphs. One is of Prince Nasiru’d-Din Mahmud and the adjacent two are unidentifiable.

There are two pillared arcades on the east and west sides. The Qibla (Prayer wall) has a marble Mihrab. The marble mihrab has an elegant foliated arch, with aisles on either side (exquisite Turkish and Afghan design).

The Mihrab has inscriptions from the Quran. It has a colonnade of marble pillars in its front. (added by Firoz Shah Tughlaq)

Only the marble Mihrab is original and Islamic origin. Without a doubt, the sanctuary and the domed ceiling are of Hindu extraction. (Wen proportioned fluted pillars having bracket capitals).

Y.D. Sharma (Delhi and its Neighborhood, 1974) says about finding some sculptured lintels at Sultan Ghari embedded in the thickness of roof concrete. It suggests that a temple existed here in 7-8th century.

Tombs of other sons of Iltutmish:

Next to Sultan Ghari’s tomb, before there existed two pillared Chatris. They had tombs of other two sons of Iltumish – Ruknu’d-Din Firuz Shah (died 1237) and Mu’izzu’d-Din Bahram Shah (died 1241).

Now, there is only a stand alone Chatri with no cenotaph. Other Chatri and the cenotaph is perished. 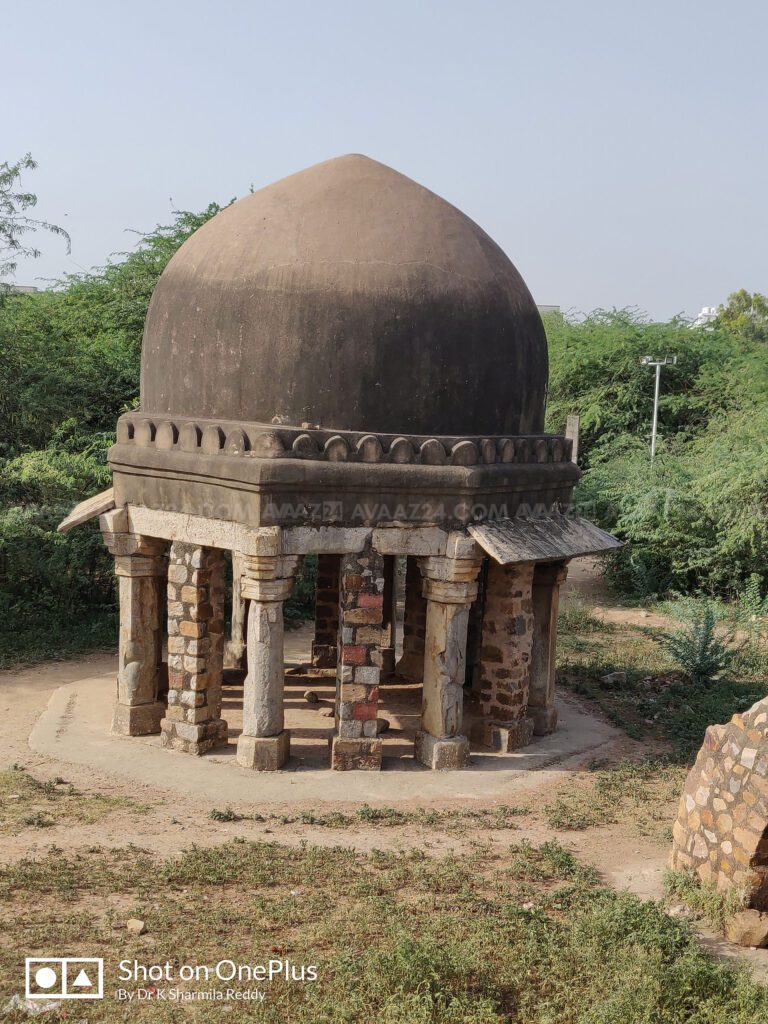 Chatri is a kind of trabeate domed canopy. The Persian word “Chatr” (Sanskrit Chattra) means an umbrella. It is an archetypical of vault of the heaven. The Persio-Arabic Suffix- I is added to it, as it is considered sacred.

It should be noted that, for the adjoining villages of Mahipalpur and Rangpuri, Sultan Ghari is the place where the cultures meet. Often a religious gathering happens here on every Thursday.
It is mandatory for newlyweds of both Hindu and Muslim communities to seek the blessings of this cave sultan.

Amidst the recent debates on name of the city Hyderabad, we at Avaaz24 tried to analyze the historical...
Classic India

Satpula is a Water Harvesting Dam built along the eastern wall of Jahanpanah by Sultan Muhammad bin Tughlaq...