The architectural remains of present day Tughlaqabad (the third city of Medieval Delhi)consists of Tughlaqabad Fort and Darul Aman. Both are on either side of Mehrauli- Badarpur road. (Previously Qutub- Badarpur Road- built by Ghiyas-ud-din).

Ghiyas-ud-din Tughlaq (aka Ghazi Malik) established the Tughlaq dynasty by defeating Khusro Khan of Khalji dynasty in 1321 AD. Eventually he built Tughlaqabad Fort, following it a tomb for himself.

The Darul Aman (Abode of peace) is built by Ghiyas-ud-din Tughlaq himself, during his lifetime in 1325AD.

It is said to be connected with the citadel of Tughlaqabad  by a causeway raised on a row of some 27arches. (ASI- DELHI PROVINCE – List of Muhammadan and Hindu Monuments- Volume IV 1922). It doesn’t exist anymore as Mehrauli- Badarpur road traverses through it.

Firoz Shah Tughlaq (the 3rd Tughlaq ruler) in his autobiography Futuhat-i-Firoz Shahi refers to the structure as “Darul Aman”. He says that he furnished it with sandal wood doors and over the graves he suspended hangings made from the curtains of the doors of Kaaba (from Mecca).

He also says that he buried in a box at the head of Muhammad bin Tughlaq’s grave in Darul Aman, deeds of forgiveness obtained from those who had suffered at the hands of that king and duly attested by witnesses.

What did Muhammad bin Tughlaq do, which necessitated such an act by his cousin? Shall be discussed by me in the next article of this Classic India series- “Jahanpanah”

Ghiyasuddin Tughlaq is known to have been at variance with Sufi Saint Shaik Nizam-ud-din Auliya.To know the reason for their hostility, read previous article of this Classic India series on Tughlaqabad fort

After his successful invasion of Bengal, Ghiyasuddin in 1325 started returning back to Delhi. While on the way, he sent an order to Saint Nizam-ud-din Auliya to leave Delhi before his own arrival there.

Despite the near approach of the king, the saint gave the same answer, to everyone “Hunuz Delhi Dur Ast”- (Delhi is yet away).

On the arrival of King at Afghanpur, some 6miles to Tughlaqabad the Sultan was accommodated by his own order, in a pavilion which has been erected hastily in just 3 days.

After the feast in the evening, the pavilion collapsed, killing the king, his favorite son Mahmud and five or six other persons.

Ziauddin Barani in his Tarikh-i- Firoz Shahi says that the accident was caused by a thunder bolt from the sky.

R. C. Majumdar  (The History and Culture of the Indian People- the Delhi Sultanate 1960) says – Barani dared not to speak the truth, which has been unfavorable to Muhammad bin Tughlaq. That is  because of the fact that, Barani is  a court historian of Firoz Shah Tughlaq.

Firishta (Tarikh-i-Firishtah 1612 AD) seems to support the view of Barani, but was not quite convinced. Hence he concludes with the expression, “God only knows the real truth”.

Ibn Battuta in his travelogue “Rihla 1325-1354” states that the building was so constructed that it would collapse if an elephant pushed against it. Prince Jauna Khan asked permission of the emperor to parade the elephants. He withdrew his friends from the pavilion. As soon as the elephants passed, the pavilion collapsed.

Ibn says that no effort was made to release the unfortunate Sultan immediately. Only after sunset, the ruins of the building were dug up. By that time, the unfortunate sultan lost his life already. His corpse was interred at  Darul Aman in the night. 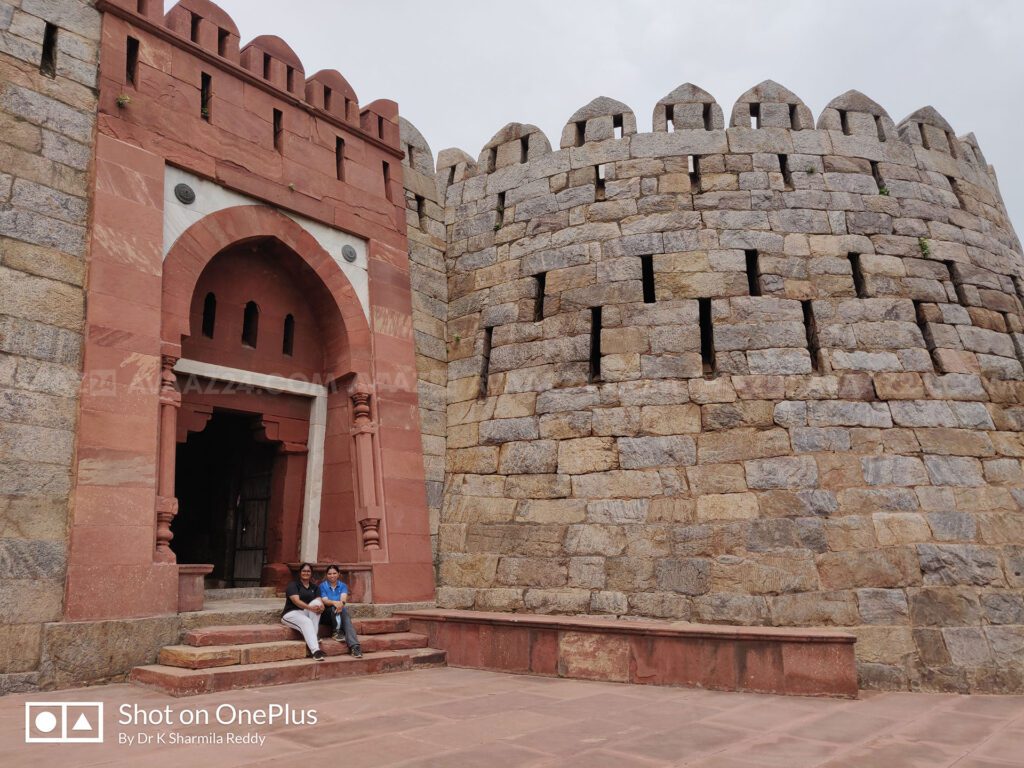 and by later historians of 16th century–

Modern Historian, Dr. Ishwari Prasad (History of Mediaeval India -From 647 to 1526 A. D. 1925AD) is also inclined to the view that Jauna Khan has murdered his father. He points out several causes of estrangement between the father and the son-

Architecture of the Tomb

The exterior plan of this fortress-tomb is in the form of an irregular pentagon with a spreading bastion at each angle. The irregular pentagon shape is because of the geographical contours of the rocky island on which the tomb is built.

On the exterior the walls rise upward with a pronounced batter like the walls of Tughlaqabad. The courtyard within it is of the same unsymmetrical outline.

The entrance to the mausoleum is through a high and massive gateway of red sandstone. A flight of 32steps from the causeway gives access to the tomb level.

To get into correct orientation with Mecca, the tomb is located at the widest part of the courtyard.

The tomb is predominantly of red sandstone.  The dome and certain decorative elements of the arches are of white marble. It should be noted that, first time marble facing of the dome is created. It is not that well fitted, probably because of lack of past experience. 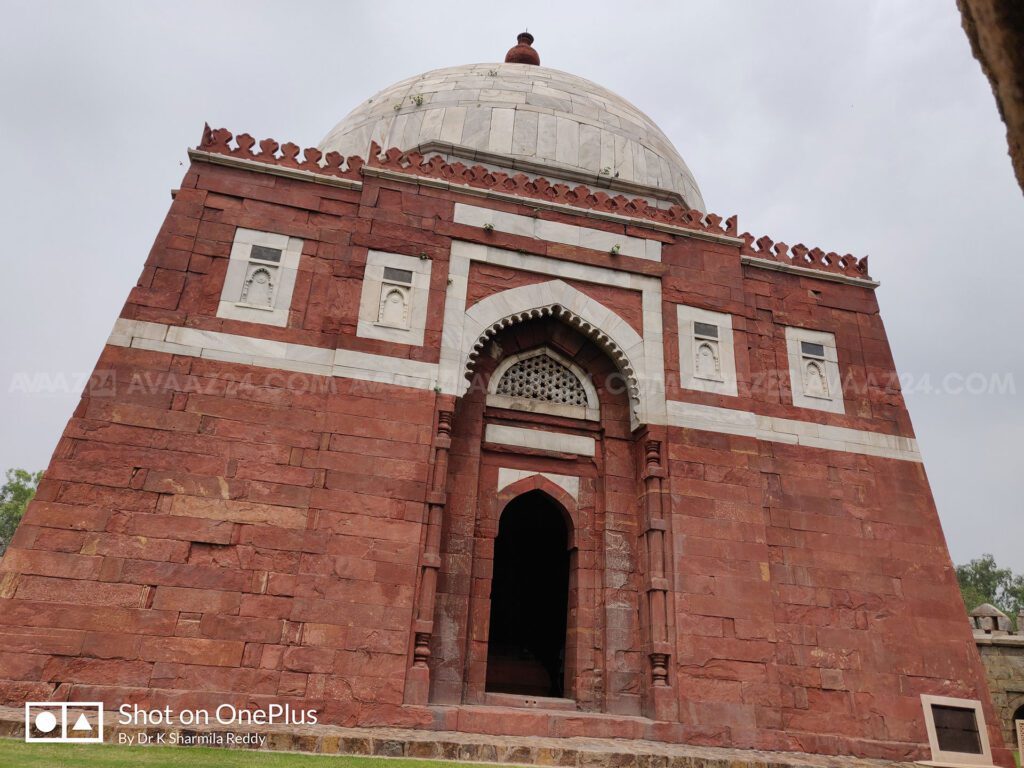 The chief character of this mausoleum is the “Batter“ or the pronounced slope of its walls. This feature is absent in the earlier constructions, like tomb of Iltutmish or the Alai gateway. The battered walls are at 75 degrees inclination. They are just like converging sides of a pyramid.

According to Gordon Hearn’s The Seven Cities of Delhi- a Description and History (1928) the introduction of this feature of slopping walls, may have been due to the experience of earthquakes. These walls are over eleven feet in thickness at the base and only four feet thick at the top.

The tombs square base is sixty-one feet on one side. The entire height of the structure, including its sandstone finial is over eighty feet.

The archways illustrate the fusion of two systems the trabeate (corbelled) and the arcuate.

The interior of this tomb is a single square chamber of thirty feet. There are three doorways on the North, South and East.

The doorways have small arched openings, filled with marble jali screens. Above the doorway, there are deeply recessed true arches, ornamented with white marble cuspings.

The western wall of the tomb is closed to accommodate the Mihrab in its interior. In the white marble Mihrab, a little bit of black marble is used.

Inside there are three plastered cenotaphs, the central one belongs to Ghiyas-ud-din Tughlaq. The other two cenotaphs are assigned to Makhdum-I-Jahan his wife and his son and successor Muhammad bin Tughlaq.

Ghiyas-ud-din’s successor Muhammad bin Tughlaq, reigned for 26 years and died with fever at Thatta, Sindh in 1352 AD. His corpse was brought back to Delhi and interred beside his father’s grave. We shall read more about Muhammad in the next article of this Classic India Series- “Jahanpanah”.

The white marble dome which surmounts the tomb rises from a low octagonal drum. It is a single dome, with a span of some fifty five feet. It has a red sandstone finial in its crown.

There is no empty space between the inner and outer surfaces of the dome. It is in the “Tartar” shape– the type which later became characteristic of the Indo-Islamic style.

The sandstone finial has a a stone Amalaka and a Kalasa, which are described as reminiscent of the indigenous features by Sunrendra Nath Sen in his book Delhi & Its Monuments (1948). (Amalaka and Kalsa are architectural features of a Hindu temple).

Inside the fortified walls of the courtyard, there are several underground vaults. They are solidly built.  Besides they have no connection with the mortuary chamber. Probably, they are storage rooms for the hoarded wealth.

Ibn Battuta, writes on this underground vaults quite remarkably.

The tomb and its entrance are like a death trap to those attempting to force it. This fortress-like composition of the tomb reflects the stern and indomitable character of the ruler whose remains lie buried here. 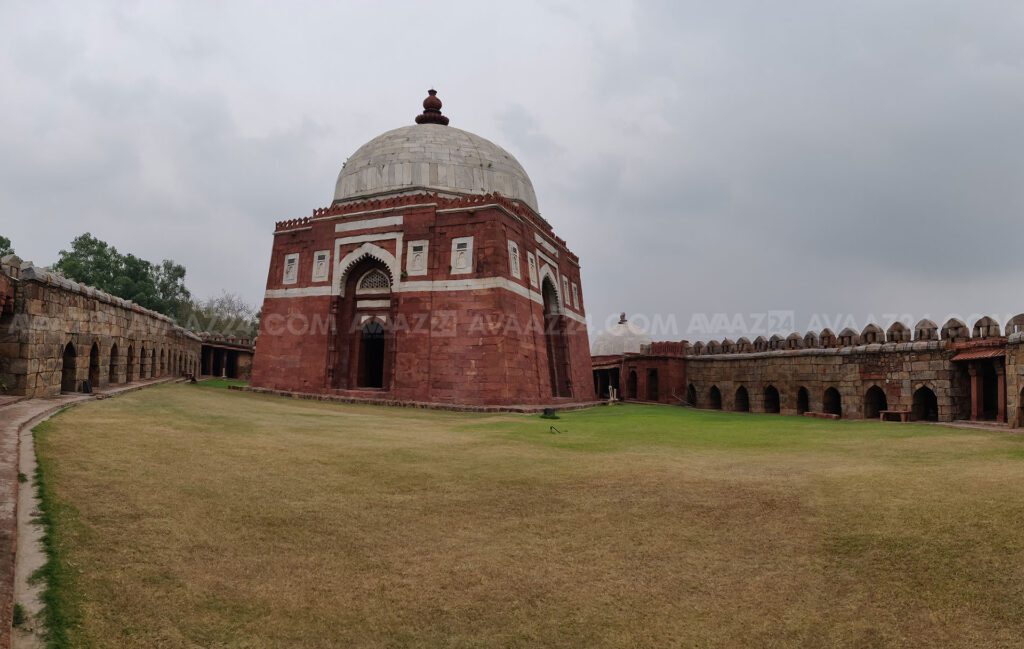 Ghiyas-ud-din also erected a magnificent mausoleum for himself at Multan when he was governor  under Ala-ud-din Khalji (1320 CE-1324CE).

In 1330 AD, Muhammad bin Tughlaq gave the tomb to the followers of a Sufi Saint Shah Rukn-i-Alam for interring his remains.

In the bastion to the north of the gate of Darul Aman, lies the Tomb of Zafar Khan.

Architecture of Tomb of Zafar Khan

It is an Octagonal Tomb surmounted by a marble dome lined with red sandstone. It is supported on eight arches which are inscribed with Quranic inscriptions.

An open passage of 6 feet wide surrounds the tomb chamber.

Inside the tomb chamber there are two cenotaphs on a raised marble plinth.

The central marble one is small and resembles a child’s grave. Next to it, to the left, there is a unidentified cenotaph of rubble masonry.

Inscription at Tomb of Zafar Khan

Over the south door, a red sandstone slab with an inscription exists. It reads as follows.

“This sacred building was erected during the auspicious reign of Majlisi Ala, the the lord of the world, Ghiyasuddunya waddin Abul Mazaffar Tughlaq Shah. May his country last forever. _____ selected for the conquest of the country and gave Zafarabad to the deceased Khan Zafar Khan.

The deceased Khan, who was a mere child, seized the country as far as the boundary of Lakhnauti in a short time and was subduing another kingdom, when suddenly by the decree of God he received a wound from the evil of that age. He repaired from this transitory world to eternity. Majilsi Ala erected the sacred building of Darul Aman for the deceased Khan.”

Nothing is known about this Zafar Khan who is described in the above inscription. He seems to have died while he was still a child.

Owing to a mistake in the reading of the inscription, the tomb is known to be of Dad Khan. 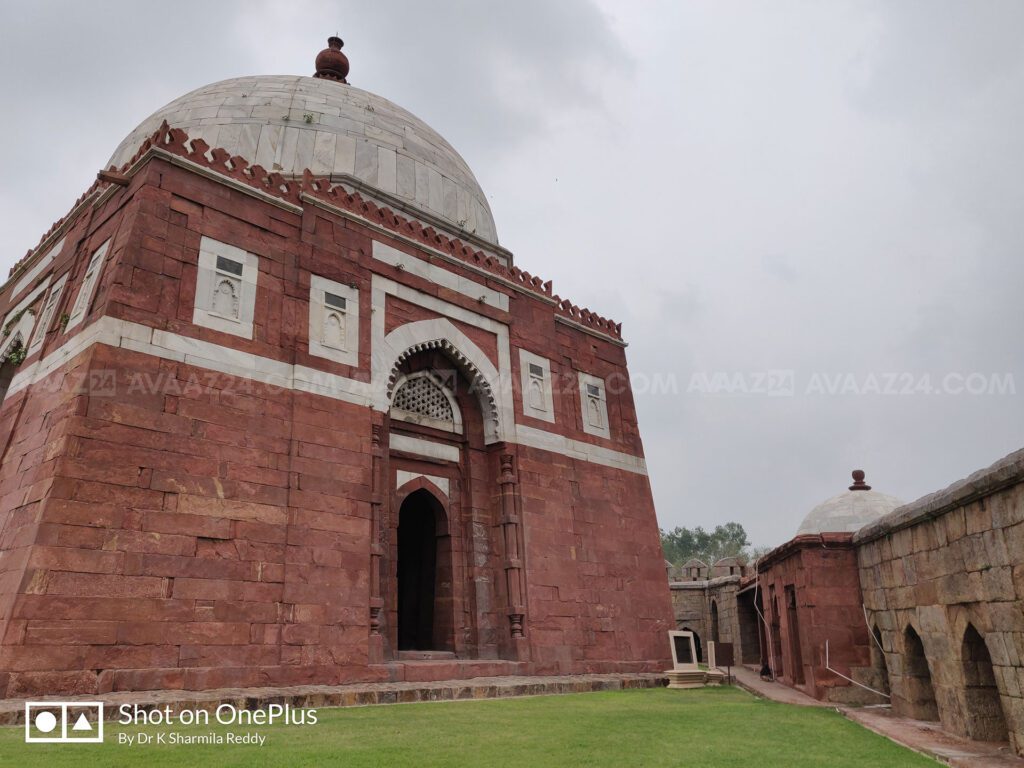 Interestingly, the oldest tomb in this enclosure is that of Zafar Khan’s. (Erected before Darul Aman)

Sir Syed Ahmad Khan’s Asar-al-Sanadid (‘The Remnant Signs of Ancient Heroes’ 1847) makes no reference to the inscription and calls it only an unknown tomb.

According to, Gordon Hearn  (The Seven Cities of Delhi- a Description and History -1928) this small grave contains the bones of Tughlaq’s favorite dog. Often dogs are considered unclean by Mahomedans. Considering this fact, indeed it is a wonderful tribute to this animal. 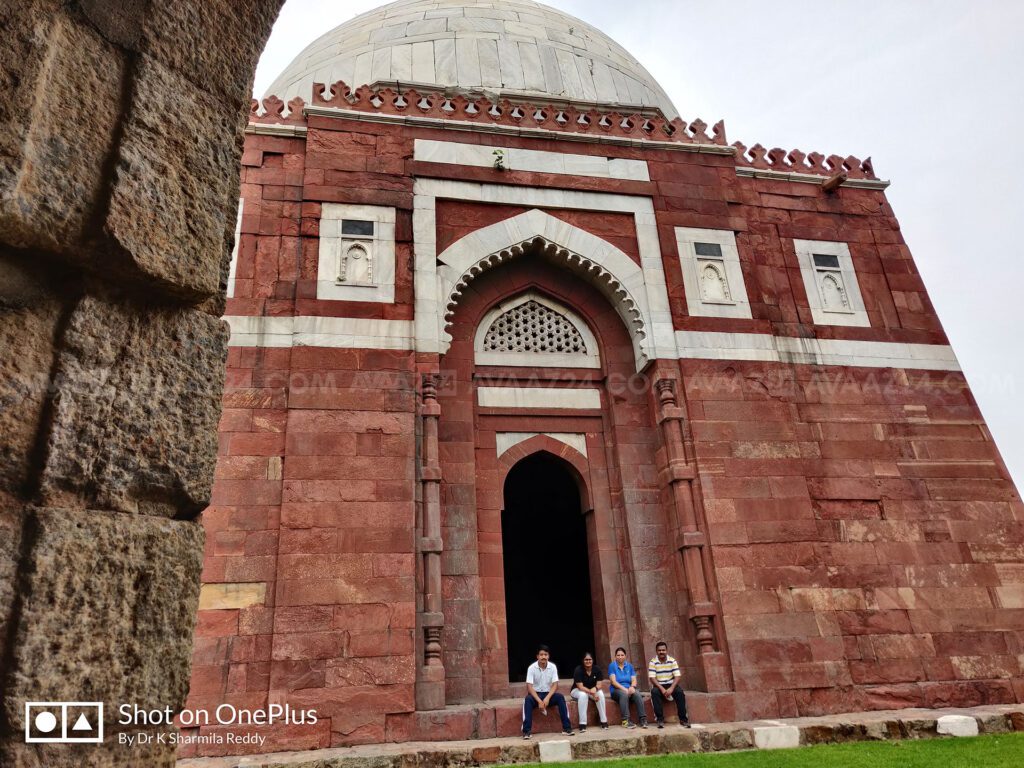 Previous articleWhy Teenmar Mallanna did not appear before the Investigation Officers
Next articleVandana Katariya, The Hockey Player, made Brand Ambassador for WCD

Amidst the recent debates on name of the city Hyderabad, we at Avaaz24 tried to analyze the historical...
Classic India

Satpula is a Water Harvesting Dam built along the eastern wall of Jahanpanah by Sultan Muhammad bin Tughlaq...