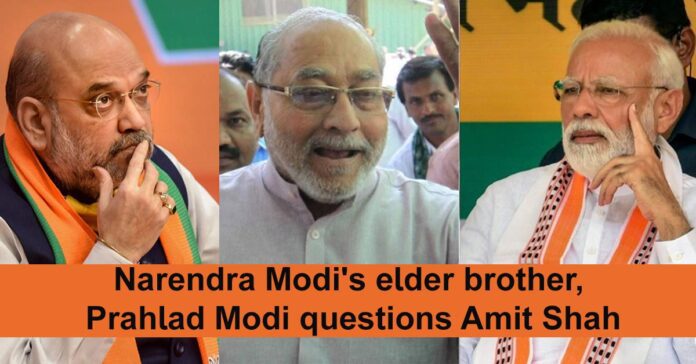 Narendra Modi’s elder brother, Prahlad Modi questions, why Amit Shah’s son Jai Shah has got the responsibility of the cricket board?

The required criteria for candidates was announced by the Gujarat BJP chief CR Patil recently . He said in his declaration that people above 60 years of age, relatives of leaders and those who have already completed three terms in the corporation, will not be given tickets this time.

This announcement of CR Patil, has stirred a wave of indifference among BJP workers and leaders in the state. PM Modi’s elder brother Prahlad Modi also commented in this regard.

While speaking to the reporters, Prahlad Modi said that his daughter Sonal Modi wanted to contest from Ahmedabad’s Bodakdev. But now with such criteria have been set, it is decided that she will not be able to contest elections, because she comes directly from PM Modi’s family.

The Trinamool Congress designed a T-shirt bearing a cartoon of Amit Shah's face. It bears a caption...
News

Amit Shah is on a one-day official visit to Telangana. After a series of meetings with many...
News

Congress MP Rahul Gandhi today roared against the Prime Minister Narendra Modi. He claimed that it was...
Judiciary

While granting bail to Jignesh Mevani, the Barpeta court in Assam requested the High court to take...
Entertainment

Resign Modi the number one trending hashtag on Twitter said that it temporarily blocked it by mistake. In...
News

TMC MLA quits the party, and expected to join BJP

In the latest blow to TMC, TMC MLA Shilabhadra Dutta quits the party and the post. He...
Politics

A fact-finding report released on Wednesday by the CPM on the communal violence in Delhi in February....
Load more