No One Can Defeat Narendra Modi, Says Prashant Kishore 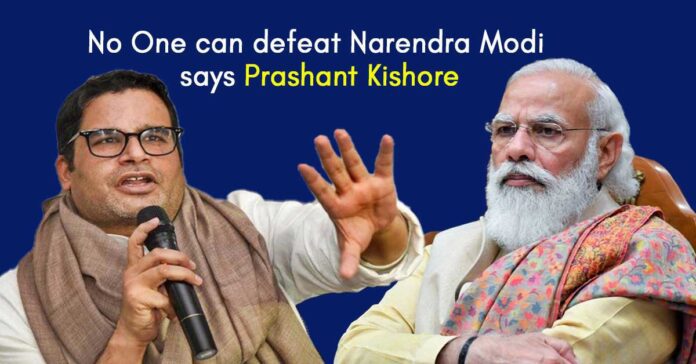 Poll Strategist Prashant Kishor said “I don’t believe any third front or fourth front can defeat Narendra Modi, then why would I be a part of any coalition”

There are wide speculations doing the rounds that a national coalition will be formed by opposition parties against the BJP. However, Poll Strategist, Prashant Kishor dismissed the formation of third or fourth front defeating the Bharatiya Janata Party in the upcoming elections.

After helping Mamata Banerjee win the elections outstandingly, Mr. Prashant Kishor, announced that he wants to do something different. He said he would retire from the job of an election strategist. He recently said that no third front or fourth front can defeat BJP.

According to the Hindustan Times, Mr. Prashant Kishor said “ I don’t believe any third or fourth front can defeat Narendra Modi so why would I be a part of any such coalition. Just because 15 persons are meeting, you cannot call it a 15-party meeting.”

Mr. Kishor said this after he attended a meeting called by NCP chief Sharad Pawar in Delhi today. A number of opposition leaders, excluding the Congress. Moreover, members of the civil society attended the meeting.

Dismissing all the speculations, Mr. Kishor said “I had lunch with him when I was in Mumbai recently and so today, he called me and asked me to come over for tea. It was just chit-chat nd a routine meeting,” Mr. Prashant Kishor said.

He refuted all the rumors’ that he would be helping NCP. “There is no question of Pawar Sahab becoming my client because I have left this space (Election Strategy) as I announced on May 2.” Mr. Kishor said.