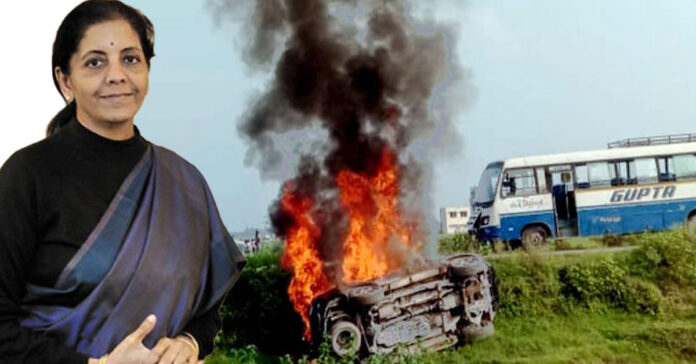 Nirmala Sitaraman, who is presently in US on an official trip condemned the Lakhimpur incident. The Finance Minister responded to a question in the Harvard Kennedy School about the Lakhimpur Kheri incident. She said that that the incident is ‘absolutely condemnable’.

She also said, “such issues are happening in other parts of India as well and those should be raised as well, when they happen and not when its suits others, because there is a BJP government in Uttar Pradesh”

The finance minister, was also questioned as to why didn’t the Prime Minister, and his Cabinet Ministers utter a word against the incident. Moreover, why are they in a ‘defensive reaction’ when somebody asks questions about such things.

She replied, “No absolutely not… it’s nice of you to have picked up that one incident which is absolutely condemnable, everyone of us says that. Equally, there are instances happening elsewhere, is my concern”.

I will not be mocked at. And if it is mocking, I will be defensive to stand up and say “sorry, let’s talk on facts”. That’s my answer for you”

Further, talking about the farms’ laws, she said that the government is willing to have talks with the farmers, “We are willing to talk about it, tell us that one particular aspect in anyone of the three laws. To date, we have not had even one particular aspect which is being questioned. And therefore, the protesters are not sure on what score they are protesting, what is it that they are objecting to”.