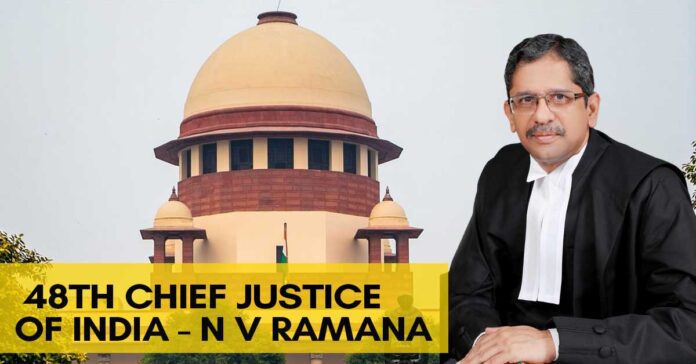 Justice NV Ramana takes oath as the 48th Chief Justice of India today. He was born in Ponnavaram village, of Krishna district in the undivided Andhra Pradesh. He hails from a normal agricultural family.

Justice N V Ramana registered himself as an advocate on 10 February, 1983.

Justice NV Ramana was the head of the SC benches. He dealt with fast track trials in this. Additionally, he dealt with trials regarding cases against legislators and the cases related to the abrogation of Article 370 of the Constitution in Jammu Kashmir.

The bench which was headed by him rejected all the petitions challenging the abrogation to the higher level bench. He headed many more including the Nirbhaya case, consequently led to the execution of the rapists.

Justice Ramana will remain in office as CJI till August 26, 2022

As per the reports of NDTV, India's Chief Justice NV Ramana strongly criticised the electronic and social...
Governance

The Supreme Court on Wednesday has ordered to puts Victorian-era Sedition Law under Section124A on hold. It...
News

The Supreme Court of India on Monday expressed its dissatisfaction regarding the investigation of the Lakhimpur Kheri...
News

The Supreme Court got furious with the Centre on Monday. It rebuked the government of failing to...
News

Modi doesn’t know the SC rule in appointing CBI Chief, or is it a drama?

Central Bureau of Investigation gets a new director. The new director of CBI is IPS officer Subodh...
News