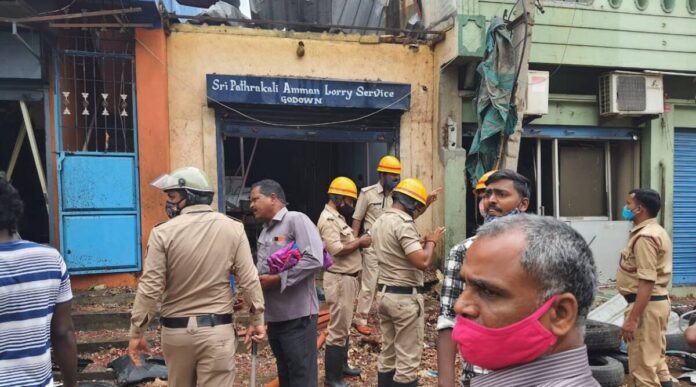 There was a huge blast in a Crackers Godown in Bengaluru, the capital of Karnataka. Three people were killed and four were seriously injured in this blast.

The blast took place in a storage facility which belonged to a transport company. It is said that this storage was being used as a transit godown. The incident happened in Bengaluru’s New Tharagupet are around 11.30 AM.

According to the police, the major impact happened due to the crackers only. Some 80 odd boxes were stored there.

“We need to check how many exploded . It looks like a handling-related explosion. We will have the exact details once the forensics team arrives here, said DCR Harish Pandey.

The deceased were identified as Fayaz(50) Manohar (29) and Aslam(45). According to the police, Fayaz ran a crackers shop, Manohar was a goods vehicle driver and Aslam had a puncture repair show just before the godown.

According to the locals, the intensity of the blast was so high that the bodies of Manohar and Fayaz’s bodies were found ripped in pieces. Aslam’s shop along with a nearby tea shop, were totally charred. Around 10 two-wheelers were also damaged in the incident.

Bengaluru: In a surprise school bag checks, Condoms, cigarettes, contraceptives and alcohol were found in the bags...
Press Releases

Curtains Down on AIAMA Expo 2022 in Bengaluru

Maharaja of Mysore His Highness Yaduveer Krishnadatta Chamaraja Wadiyar was the guest of honour at the Valedictory...
News

A major accident occurred at Navale bridge on the Pune-Bengaluru highway in Pune, about 48 vehicles got...
News

A mysterious blast in a moving auto in a communally-sensitive city of Mangaluru sent shock waves across...
Crime

Kupwara Bus Accident: In a shocking incident, around 20 people were injured in a bus accident. The...
Crime

Madhya Pradesh Accident: 11 died after SUV head on with Bus

In a tragic incident, up to 11 persons were died and one got injured in the bus...
News

Karnataka Temple chariot fell down during the procession, Viral video

A major accident was averted at a temple festival on Tuesday in Karnataka where a temple chariot...
News

The new ‘Idli ATM’ machine in Bengaluru makes and serves fresh idlis at the press of a...
News

Congress Leader Rahul Gandhi resumed the Bharat Jodo yatra from Rampura in Karnataka. He was accompanied by...
Load more