Anupam Kher is a clown, can’t tolerate to see him as JP 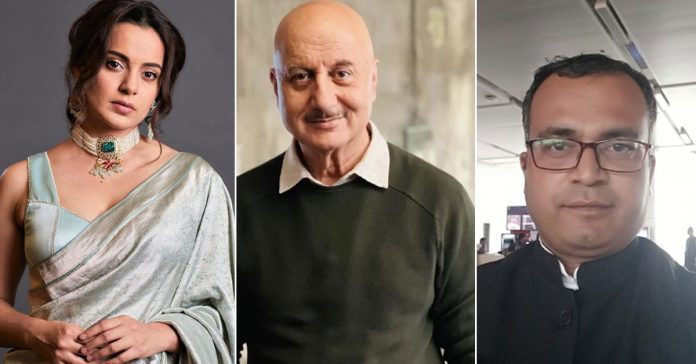 Janata Party President, Navneet Kumar Chaturvedi, warned Kangana Ranaut and Anupam Kher. He said that there should not be any character assassination of the former Prime Minister, Jayprakash Narayan. Jayprakash Narayan is the founder of Janata party.

The President of Janata Party, took to LinkedIn and wrote,” “Kangana Ranaut’s company Manikarnika Films Pvt Ltd is making the film ‘Emergency’, where Kangana Ranaut will play the role of Indira Gandhi and Anupam Kher will play the role of Loknayak Jayaprakash Narayan. Congressmen will probably tolerate seeing Kangana as Indira Ji because they have no option. But we will not tolerate anything against JP which will hurt his image.”

Janata Party President, Navneet further said, “The Janata Party will never tolerate a clown like Anupam Kher in the role of Lok Nayak Jayaprakash Narayan. Anupam Kher has earlier played the role of Manmohan Singh Ji in the film ‘Accidental Prime Minister’ and has shown him in a negative shade where he has assassinated Manmohan Singh ji (Character). But Janata Party will not tolerate such accidental part-timer political person.”

Will stop the film

But as Janata Party President I, Navneet Chaturvedi, will not allow, Anupam Kher and Kangana Ranaut to play with JP’s image easily. The Janata Party will make every effort to stop this film emergency, our aim is to stop the attempt to slander the character through the film. It will be our endeavor to stop the lies that will be served to the new generation through this film.”

Janata Party President Navneet Chaturvedi said, “At present, we are issuing notices to the filmmakers. The demand of the Janata Party is that the script of the film ‘Emergency’ should be put forward so that we can decide whether any harm is being done to the image of Jayaprakash Narayan through this film.

How much truth is there in the script and how much lies will be served with masala? And will not tolerate seeing Anupam Kher as Jayaprakash Narayan.”

Our megastar Chiranjeevi konidela honored with Indian Film Personality of the Year 2022 on the eve of...
Inspiring

Director Om Raut announces a new release date of Adipurush in his official twitter account. And he...
Load more