The question now arises why would a former police officer behave like a school boy and plant the SUV near 'Antilia', when he is aware that there are more CCTV cameras in that street than any other street. 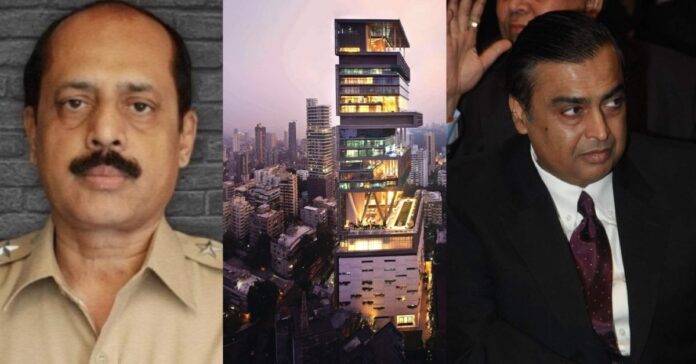 The script writer of the Antilia Bomb Scare Case involving Sachin Vaze’s role in the crime took extra pains to make everything seem to be the inability on the part of the Sena Government.

The script writer of Antilia Bomb Scare Case chose Sachin Vaze, an ‘Encounter Specialist’ who was later on accused of plotting against the wealthiest man of India, Mukesh Ambani.

Encounter Specialists’, this word raises eyebrows and are always the darlings of the middle class. Many young people take them as role models. Hence, the writer hit a bulls eye right in the first place. The location and the timing added the masala needed to make the things go out of the hand of the Sena Government.

The Antilia Bomb Scare Case was started on February 25, 2021. An SUV with explosives laden with gelatin sticks was parked a few meters away from ‘Antilia”, the house of Mukesh Ambani.

The SUV consisted of 20 gelatin sticks which were UN-assembled. There was a letter threatening the industrialist couple in the car. The breach of security was taken very seriously and the case was transferred to NIA.

The investigation brought in many unanswered questions. Firstly, the SUV belonged to a Thane-based business man, Mansukh Hiren. When questioned about the SUV, he said that he had registered a complaint with the police as the car was stolen a few days ago.

While the investigation was in progress, the business man Mansukh Hiren was found dead. His body was found in a creek nearby on March 5.

The question now arises, why would a former police officer behave like a school boy and plant the SUV near ‘Antilia’, when he is aware that there are more CCTV cameras in that street than any other street. Did he have a plan to extort money from Mukesh Ambani? Was this a plot to destabilize the Uddhav Thackeray Government by the BJP? Did Sachin Vaze turn a rogue?

Crimes are committed with a motive. The motive behind this Antilia Bomb Scare Case seems to be many. However, Sachin Vaze was arrested.

The real twist came when the former Police Commissioner of Mumbai, Parambir Singh wrote an unsigned letter to the Chief Minister. He accused the Home Minister Anil Deshmukh of corruption.

Singh had refuted that Anil Deshmukh, the Home Minister had pressurized Sachin Vaze to collect 100 Cr corruption. However, all the allegations have been rubbished by Anil Deshmukh.

There are many twists and turns in the Antilia Bomb Scare Case but the script writer for this crime story is still unknown. BJP has taken this opportunity to take a lead and defame the Shiv Sena Government.

Devendra Fadnavis has repeatedly raised this issue in the assembly. All the ministers were shocked to hear such secretive information about the case. The information which had to be known to Uddhav Thackeray and his ministers was known to the opposition.

Fadnavis wanted to prove that Thackeray was not having full hold over the administration.

Many plots and tricks may crop up everyday and may turn the tides towards many innocent lives to save themselves but it is certain now that many secrets will go undercover and the scriptwriter of this Antilia Bomb Scare Case would go unrevealed.