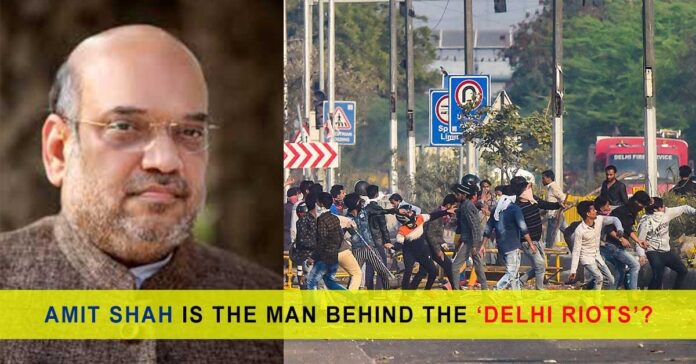 A fact-finding report released on Wednesday by the CPM on the communal violence in Delhi in February. The report has held Union home minister Amit Shah responsible for the upsurge of violence and prejudicing the probe.

The CPM report has come up with a different facts by giving several minute instances of violence . The report has highlighted several identical FIRs and confessions mentioned by the police as well as complaints of torture.

The report titled, Communal Violence in North East Delhi, February 2020 cites that there was substantial measure of responsibility of the home ministry under Mr Amit Shah for the upsurge of violence.”

The report concluded that “it is incorrect to describe the communal violence as Delhi riots. ‘Riots’ describe a situation where both sides are equally participatory…. However, the offensive was from the Hindutva mobs while the other side, in the main, was desperately trying to save themselves from such attacks…. In almost all areas, there is video evidence of the police siding with the Hindutva mobs.”

Quoting a charge sheet filed in one of the cases — in which several students have been charged with terrorism for allegedly inciting riots by their protests against the new citizenship regime — the report shows that the number of personnel deployed during the riots from February 23 to 27 was not sufficient enough.

The report also adds that the home minister laid down its findings (in the Lok Sabha on March 11), even before any investigation was done. The investigation which followed was was only to prove and validate this narrative.

Shah dismissed the well-documented speeches by BJP leaders out rightly. The hate speeches given by the leaders were to instigate people to shoot traitors or members of the minority community who will invade homes of Hindus to rape and kill.

Amit Shah further tried to describe what he thought were the real hate speeches. He said that Congress leaders gave hate speeches on December 14, 2019, at a rally calling upon people to come out onto the streets because it was a do-or-die battle. He built a version in a convincing way that the Opposition was the one who was inciting violence and blamed the minority community for the violence.

The Home minister while talking in the Lok Sabha on March 11, called the riots a “well-planned conspiracy” . He appreciated the police for controlling the violence within 36 hours. Unable to bear his lies, the Congress and the CPM walked out during his speech. The reality, according to the report describes that attacks were done even on February 28, five days after the killings began.

West Delhi BJP MP Parvesh Verma instigated people by saying on January 28: “What happened in Kashmir with Kashmiri Pandits could happen in Delhi also. Lakhs of people gather at Shaheen Bagh, they could enter houses, rape and kill your sisters and daughters. The people need to decide now.”

BJP MP Parvesh Verma, Union minister Anurag Thakur and BJP candidate Kapil Mishra were the main people to give hate speeches, incendiary and communal remarks and they justified it but there was no mention of their names in any of the cases later.

Besides the speech of Mishra on February 23, the report highlights provocative sloganeering in Shivratri processions of February 21. It added that two Muslim boys were waylaid near the Maujpur-Babarpur Metro station on February 22.

The Delhi government is criticized by the report for delays and partial compensation, and sought an independent probe by a retired high court judge.

ALSO READ: Kapil Mishra: The Man of the Delhi Riots 2020

The Trinamool Congress designed a T-shirt bearing a cartoon of Amit Shah's face. It bears a caption...
News

Amit Shah is on a one-day official visit to Telangana. After a series of meetings with many...
News

Congress MP Rahul Gandhi today roared against the Prime Minister Narendra Modi. He claimed that it was...
Entertainment

Activist Umar Khalid ’s lawyer alleged that there are a few media channels who have been biased...
News

TMC MLA quits the party, and expected to join BJP

In the latest blow to TMC, TMC MLA Shilabhadra Dutta quits the party and the post. He...
Load more