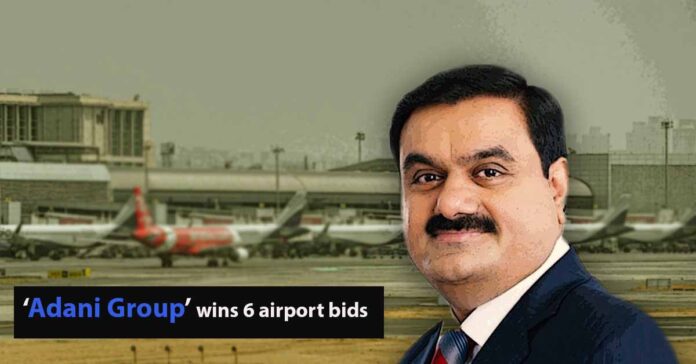 Ahmedabad, Lucknow, Mangalore, Jaipur, Guwahati, Thiruvananthapuram airports are awarded to the Adani group. This group has been given the right to operate these 6 airports for 50 years.

Apart from the above said airports the Adani Group has also acquired the Mumbai Airport, which is the second-largest airport in the country. It was given a green signal by the airport authority its takeover on 12 January.

Adani Group, which is an Ahmedabad-based company, has made the largest bid for 6 airports. Surprisingly, a report has been published recently expressing that the NITI Aayog and Finance Ministry had objected to the bidding process in the year 2019. The report says that, both the FinMin and NITI Aayog had raised objections over awarding the bid of 6 airports to the same bidder but it was ignored.

The report reveals that bids were invited for Ahmedabad, Lucknow, Mangalore, Jaipur, Guwahati, Thiruvananthapuram airports under the NDA government’s largest privatization program. The proposal was discussed by the Centre’s Public-Private Partnership Appraisal Committee (PPPAC) on 11 December 2018.

The report says that the minutes of the meeting written during the committee meeting reveal that the Department of Economic Affairs had cautioned over the deal. The department said that these 6 airports are highly capital intensive and had objected to giving them to the same company.

It also issued few suggestions . Most importantly, it suggested to include the clause of not awarding more than two airports to the same bidder considering the high financial risk and performance issues. It also said that awarding bids to different companies would also facilitate yardstick competition.

All these suggestions were ignored. The finance ministry had also approached the president of Delhi and Mumbai airports. In all the bids, GMR was the only qualified bidder but surprisingly, both the airports were not given to it.

The NITI Aayog also expressed a different concern on the finance ministry’s note. The NITI Aayog objected that the memo of the PPPAC memo was against the government’s policy. It was quoted that any bidder who does not have the technical capability will not be able to provide services as per the commitment of the government.

SC Garg, then Secretary, Ministry of Finance, headed the PPAC. He replied to the objections raised that it has already been decided that earlier experiences will not be made the basis of bidding. A year after winning the bid, the Adani Group signed a concession agreement for Ahmedabad, Mangalore and Lucknow airports. In terms of bidding, the Adani Group outperformed the GMR Group, Zurik Airport and Kochi International Airport Limited. As of now, the Adani group has the right to operate 6 airports for 50 years.