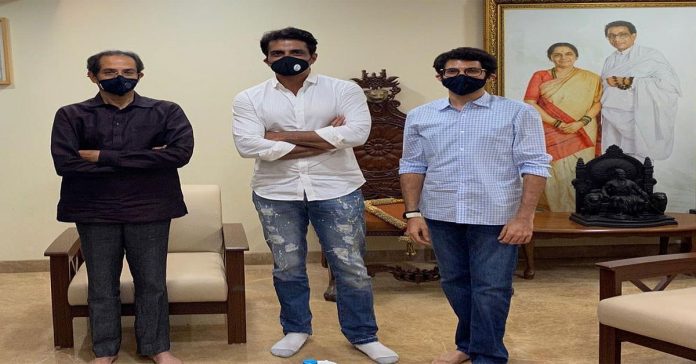 Actor Sonu Sood, who has been praised on social media for arranging transport for stranded migrants, meets Maharashtra Chief Minister Uddhav Thackeray at his Mumbai resident”Matoshree”.

The meeting came on a day when Shiv Sena MP Sanjay Raut alleged that the actor’s generosity was part of a BJP plot to show the state government in poor light.

Sanjay Raut, in his weekly column in the party’s mouthpiece Saamna, had written that Mr Sood would promote any party if paid well.

“This evening Sonu Sood meets with CM Maharashtra Uddhav Thackeray ji along with Minister Aslam Shaikh and me. Better together, stronger together to assist as many people through as many people. Good to have met a good soul to work for the people together”, he tweeted.

Mr. Sood, after meeting Mr. Thackeray, downplayed Mr. Raut’s sharp criticism and said every party across the country has been supporting him.

“They are also supporting it and it’s not about any particular party or anything… we have to support all the people who are suffering… every party from Kashmir to Kanya Kumari has supported me…,” he said, denying any misunderstanding with the state government.

Mr. Raut, in his weekly column in the party’s mouthpiece Saamna, had written that Mr. Sood would promote any party if paid well.

“Sood is an actor whose profession is to deliver dialogues scripted by someone else and make a living out of it. There are many people like Sood who would promote any political party if paid well,” he said.

Strongly defending the state government, which also comprises the Nationalist Congress Party (NCP) and the Congress, over its handling of the migrant crisis, Mr Raut said, “No other state could have treated migrant workers the way they have been taken care of by the Maharashtra government.”

“In the end, Sonu Sood has found the address of Maharashtra’s Chief Minister. He Has reached Matoshree. Jai Maharashtra,” he tweeted in Marathi.

Mr. Sood has arranged transport for hundreds of migrants in the last two months. He also helps those who approach him on Twitter.

ALSO READ: SC orders Centre and state to transport all migrants to their native places within 15 days

After three days of IT raids by the Income Tax department in the offices and houses of film...
News

Goswami has announced his plans to expand his network across the country and internationally, while airing a...
Columns

Who is behind Sonu Sood’s Philanthropy?