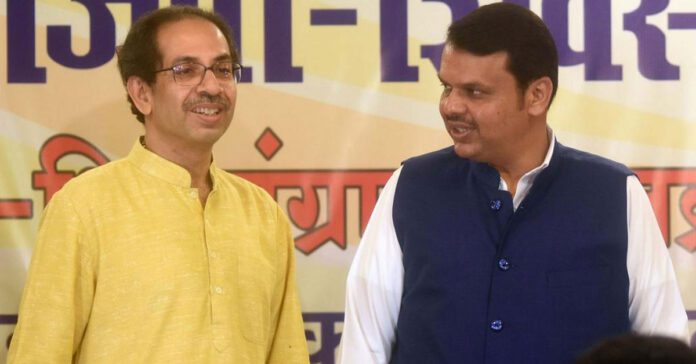 Devendra Fadnavis said, “We were never enemies. shiv sena were our friends and people whom they fought against, formed government together with them and they left us”.

Former Chief Minister of Maharashtra, Devendra Fadnavis, who is always finding faults with Shiv Sena made a surprising comment. On Sunday, Fadnavis claimed that the Shiv Sena was ‘never’ an ‘enemy’.

When he was questioned about the possibility of the reunion of Shiv Sena and the BJP, by the reporters. He said that an appropriate decision will be taken in view of the decision soon.

The shades of reunion comments by the former Maharashtra Chief Minister come when action against the leaders of the Nationalist Congress Party(NCP) by the central agencies.

However, Shiv Sena and NCP blamed the BJP for using the central agencies to target the opposition parties. The claimed that BJP is trying to de-stabilize the three party Maharashtra government.

Presumably, the so called personal meeting with PM Narendra Modi last month may lead to some kind of reunion between the two allies.

However, the Shiv Sena explained the meeting to be a personal meeting and protocol. Moreover, it said that it values personal relations irrespective of political affiliations.

Interestingly, a few days later, Shiv Sena MLA Pratap Sarnaik, wrote a letter to Mr. Thackeray asking him to rejoin the alliance with the BJP.

It is important to remember that this MLA is under the radar of the Enforcement Department.