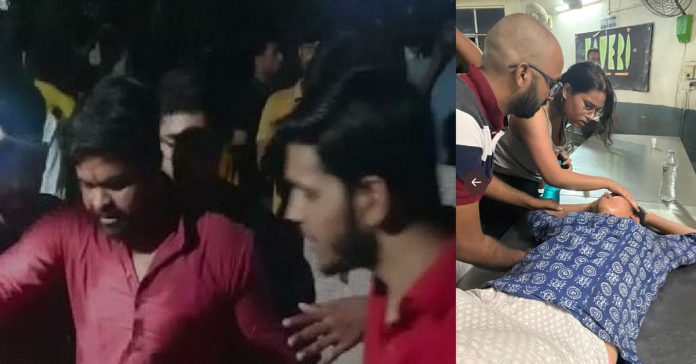 ABVP, JNUSU students clash at the JNU campus on Ramanavami. 16 students from both Akhil Bharatiya Vidyarthi Parishad (ABVP) and Jawaharlal Nehru University students’ Union (JNUSU) were injured during a clash on the campus.

According to NDTV, the Delhi police registered an FIR in connection with a clash between students of the two groups. The clash in the JNU campus took place allegedly over non-vegetarian food being served in the hostel mess. This was opposed by the ABVP students as Ram Navami was being celebrated across the country.

The police confirmed that an FIR has been registered based on a complaint filed by members of all the students unions. The FIR was filed by JNUSU,SFI,DSF and AISA against unknown ABVP students.

The officials said that an FIR has been registered under different sections according to the Indian Penal Code. Furthermore, “the probe is on to collect evidence and identify culprits.”

However, according to the Deputy Commissioner of Police (South-west) Manoj C said that ABVP members plan to file a complaint today.

JNUSU alleged that the ABVP members did not allow students to have non-vegetarian food in the hostel mess. Moreover, they threatened everyone and created a violent atmosphere.

However, the ABVP members denied all these charges. Furthermore, they claimed that the “Leftists” obstructed a puja programmer organized at the hostel on Ram Navami.

It is learnt that students from both sides have accused each other of pelting stones and injuring their members. In addition to this, the JNUSU and ABVP took out separate marches inside the university campus to protest against the clash.

However, the police rushed to the campus and ensured that there is no further escalation of the violence. The students injured in the clashes were shifted to nearby hospitals for treatment.

Rajasthan, Delhi, Haryana, UP and Odisha are the five states which are given the warning of heat...
Governance

Despite SC order to stop in Delhi’s Jahangirpuri, bulldozers are at work

Bulldozers did not stop demolition work of structures in Delhi's Jahangirpuri, despite a Supreme court order to...
Crime

The 8 BJP members accused of attacking Kejriwal house were given a grand welcome in the Delhi...
News

A passenger's phone catches fire mid-air in a Dibrugarh-Delhi Indigo flight on Thursday.  According to the cabin...
Governance

Telangana CM KCR kickstarted the protest in Delhi against the center regarding the paddy procurement policy on...
News

The new JNU Vice Chancellor, Santishree Dhullipadi Pandit, tried to shut down all the criticism on her...
Governance

The Amar Jawan Jyoti at India Gate in Delhi which was constructed after the Indo-Pakistani War of...
News

The Mumbai Police on Monday detained a 21-year old Bengaluru man in connection with the 'Bulli Bai'...
Load more