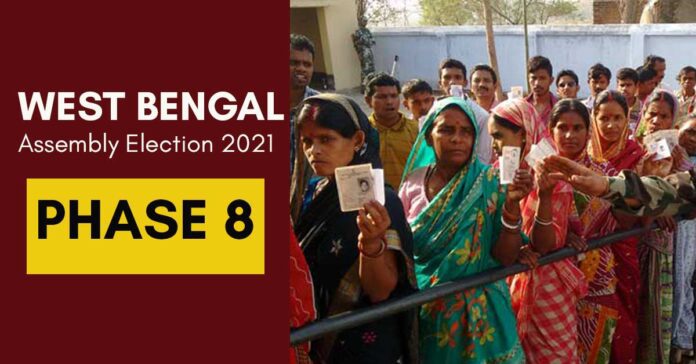 West Bengal elections 2021 Updates: 56.19% voter turn out recorded till 1.00 PM . Stray incidents of violence reported. However, the overall polling process has been peaceful till now.

Voters queued outside the polling booths for the eighth and last phase of Assembly elections. Voting is being held in 11,860 polling stations of 35 constituencies. They are 11 each in Musheerabad and Birbhum, six in Malda and 7 in Kolkata.

She said that they tried to kill her and disperse the voters from voting. However, no one was hurt in this attack.

There were clashes between two groups in Kolkata’s Beliahghata area. The police resorted to mild lathi-charge and dispersed the crowd.

BJP candidate, Tarakeshwar Saha suffered injuries when his car was ransacked by some miscreants. This incident happened in the Nanoor Constituency of Birbhaum district.

BJP candidate Kalyan Choubey was gheraoed by a group of people when he came to visit the polling station. This incident happened in Maniktala Constituency in Kolkata.

Neck to neck competition is expected in these constituencies between BJP and the TMC.