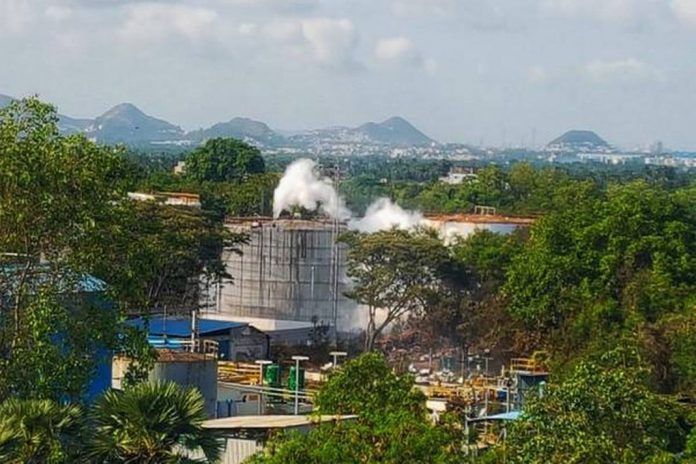 Vizag LG Polymers Gas Leak: A chemical gas leakage was reported at LG Polymers industry in RR Venkatapuram village in Visakhapatnam on Thursday. Six people including a child died in the incident which has now been brought under control.

The death toll has now risen to six including one child due to the gas leak at a chemical plant in Vizag. More than four people were admitted to Visakhapatnam’s King George Hospital and two died in a village nearby.

At least 1,000 supposedly took ill after an alleged gas leak was reported at a chemical plant in Vizag on Thursday.

The incident occurred at LG Polymers in A P’s,  RR Venkatapuram village in Visakhapatnam around 3.00 am today.

RK Meena, CP Visakhapatnam City said, ‘The gas leak has been “neutralised”, it’s maximum impact was witnessed in a 1.5 km radius of ground zero and odour was felt till 2-2.5 km.

Andhra Pradesh Chief Minister, YS Jagan Mohan Reddy found out about the incident in Visakhapatnam and gave the necessary directions to the district officials.  Every possible step to save lives and bring the situation under control will be taken up said,The Chief Minister’s Office said in a statement.

“Reddy will leave for Vizag and visit the King George Hospital where the affected are being treated. He is closely monitoring the situation and has instructed the district machinery to take immediate steps and provide all help,” it added.

A 20 year old girl who got stuck between the platform and train while deboarding the train...
News

Girl slits throat of fiance to avoid marrying him in Vizag

A girl slits the throat of her fiance in an attempt to get rid of him as...
News

Gas leak responsible for ‘eye of fire’ in Mexican waters

Flames on the surface of the Gulf of Mexico, resembled a large “eye of fire”. According to...
News

67 MLAs in 1966 resigned from Assembly for Vizag Steel Plan

It is unknown to the new generation that as many as 67 Opposition MLAs from united Andhra...